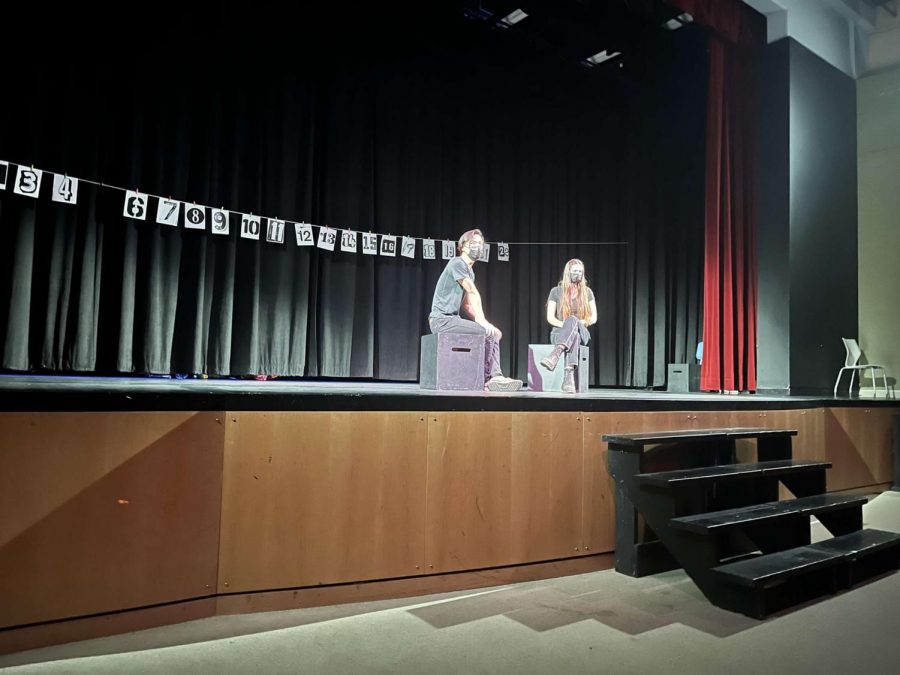 Senior Andre-Padraig Pang and junior Grace Stermer perform on stage on Friday. The production was directed by junior Azadeh Reiskin and was produced under the Students Art Workshop.

WEB EXCLUSIVE | Syufy Theatre curtains draw open once again tonight for the grades nine through 12 theater department’s production of Too Much Light Makes the Baby Go Blind by Greg Allen.

“Since there are so many scenes in the play, the audience gets to pick what scenes come after the previous one,” sophomore Amelia Alton said. “We put numbers of the scenes on a clothesline and whichever one the audience picks, we play.”

The production was directed and selected by junior Azadeh Reiskin and was produced under the Students Art Workshop, a club that allows students to create proposals and showcase their projects.

“I offered Azadeh a selection of plays to review and she ended up choosing Too Much Light Makes The Baby Go Blind,” Theatre Program Director Margaret Hee said. “Azadeh has a natural talent for directing and her vision was very strong from the beginning.”

Too Much Light Makes the Baby Go Blind is also featured in the Students Art Workshop alongside a dance performance from Junior Sophia Wu.

“The Student Arts Workshop gives students plenty of autonomy to pursue anything we might want to create, and I’ve had a few plays that I’ve wanted to direct for a while, so I took this opportunity to do so,” Reiskin said. “I really enjoyed getting to work with my peers in a new way and seeing something I’ve been so passionate about come to life.”

Rehearsals took place Tuesdays to Fridays from 3:45. p.m. to 6:30 p.m and the cast has been consistently rehearsing the play since Nov 2. There are 12 cast members in total featured in the production.

“I think the audience interaction is really fun to have,” Alton said. “It makes it so the play is different every night and you never know what’s going to happen.”