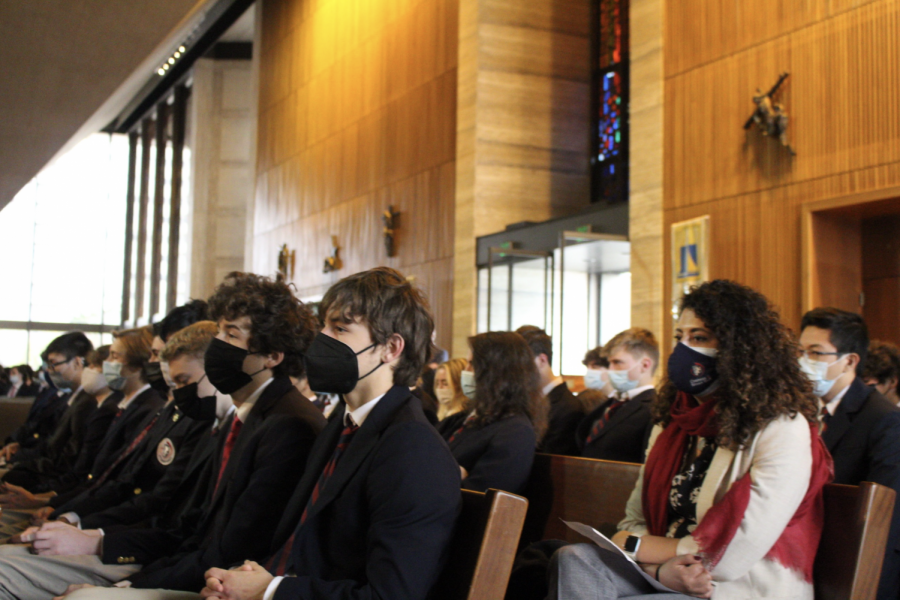 Spanish teacher Diana Bolaños waits for mass to begin. Catholics celebrate the Immaculate Conception on the same date each year.

WEB EXCLUSIVE | Students, faculty and staff gathered today at the Cathedral of Saint Mary of the Assumption to celebrate the Mass of the Holy Conception.

This holy day on the liturgical calendar commemorates Mary’s place in salvation history as the mother of Jesus Christ, according to the Roman Catholic calendar. The celebration recognizes Mary being free from original sin, and thus that she is a vehicle for the Messiah.

“The highlight of today’s mass celebration for me was singing in the choir during the service,” junior Audrey Roomian said. “My favorite song was ‘All the Ends of the Earth.’”

Pope Pius IX issued an apostolic constitution, known as Ineffabilis Deus, on Dec. 8, 1854, according to Beginning Catholic This document clarified the importance of the immaculate Conception in the Catholic Church, which is why this holiday occurs on the same date each year.

“Dec. 8 is a very important day for Catholics,” Head of School Rachel Simpson said. “We haven’t been able to have mass in-person until this year because of COVID-19 so it was very important and special that we were able to celebrate with the grades two through 12 community today.”

Students attended their B period class until 9 a.m. and then proceeded to walk to the cathedral and attend mass. They then returned to campus at 11:10 a.m to resume B period and lunch. C period commenced at 1 p.m. as usual, and A block was moved to Learning Lab time the previous day.

“I like how the entire school comes together as a community to celebrate a special mass,” junior Isabella Mercado said. “Especially after a year of being on Zoom for mass, it’s really nice to be back in person.

The Immaculate Conception Feast began and was originally celebrated in the Eastern Orthodox Church until it was later spread to the west, according to Britannica. The last time an in-person celebration of the Mass of the Holy Immaculate fell on a school day was in December of  2018.

“I’m happy that I got to experience this holiday in-person at school,” Roomian said. “The whole thing was a positive experience for me and I look forward to singing in future masses.”