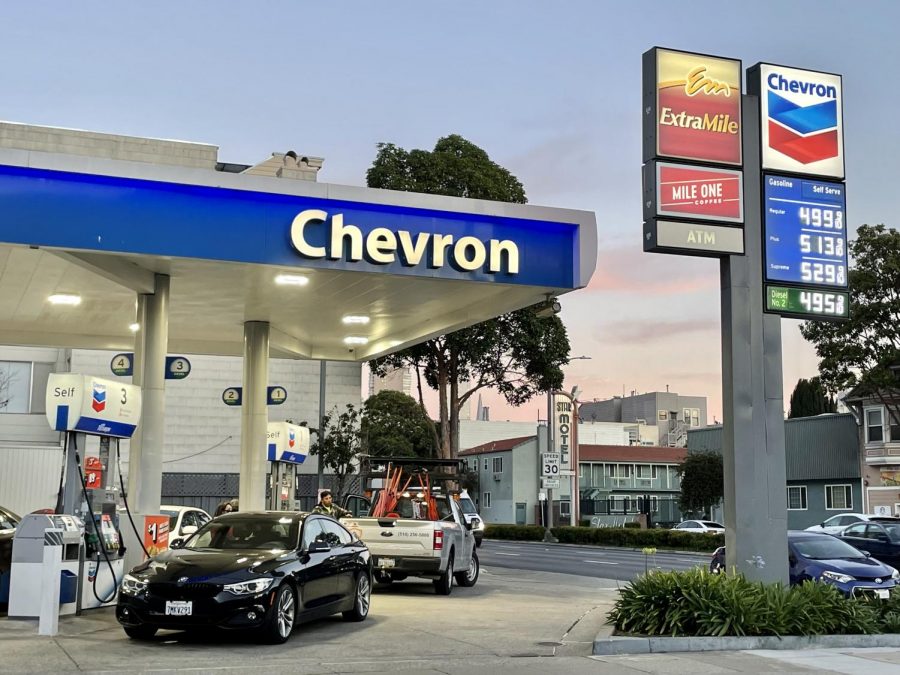 A Chevron gas station on Lombard Street charges $4.99 per gallon of regular unleaded gasoline. Many fine electric vehicles are more appealing due to their lower charging cost.

WEB EXCLUSIVE | The record for California gas prices broke yesterday as the rates rose to an average of $4.68 per gallon of regular unleaded gas.

The nationwide average price for a gallon of unleaded gas is $3.41, according to the American Automobile Association. Purchasing a gallon of gasoline in San Francisco, however, costs $1.48 more than the national average, impacting how much money teenagers are required to spend to fill up their tanks.

“The car I usually drive uses a lot of fuel very quickly and my family and I have definitely noticed a price increase,” junior Anya Riney-Niewiadomski said. “When I eventually get my own car I’ll most likely want an electric one since the cost definitely seems cheaper in the long run.”

In 2017, Senate Bill 1 set out to gradually raise fuel tax each year in order to direct more revenue towards transit and safety development in California. As a result, gas prices have risen an average of $1.62 since 2017.

“This increase has been caused by recent natural disasters, oil production slowing down during COVID and decreased global supply,” Global Politics Teacher Devin DeMartini Cooke said. “The economic impacts are vast, from individual consumer use to shipping costs that often get passed onto the price of goods and services, leading to inflation.”

Governor Gavin Newsom banned the sale of newly made combustion cars in California by 2035, with the intention to promote electric vehicles. Electric cars generally have higher list prices than diesel vehicles, but electric charging ports are often cheaper than filling gas at a gas station.

“I drive my parents’ cars which are a Tesla EV and an Acura SUV,” junior Lucy Selcow said. “The Acura requires only a little gasoline because it’s a hybrid, but the price increase has still been apparent.”

Newsom’s plan is projected to reduce 35% of greenhouse gas emissions caused by motor vehicles throughout California.

“I think that there are many incentives in California, both financially and environmentally, to own hybrid vehicles,” DeMartini Cooke said. “The California government could encourage citizens to utilize public transportation through increased attention to infrastructure, subsidize prices of gas and incentivize the purchase of hybrid vehicles with tax breaks.”

“The rise in gas prices has definitely made me more mindful of my driving habits,” Riney-Niewiadomski said. “It’s affecting our climate, especially in California where cities like Los Angeles get a lot of car smog.”