Students gather in assembly, listen to author speak on There There 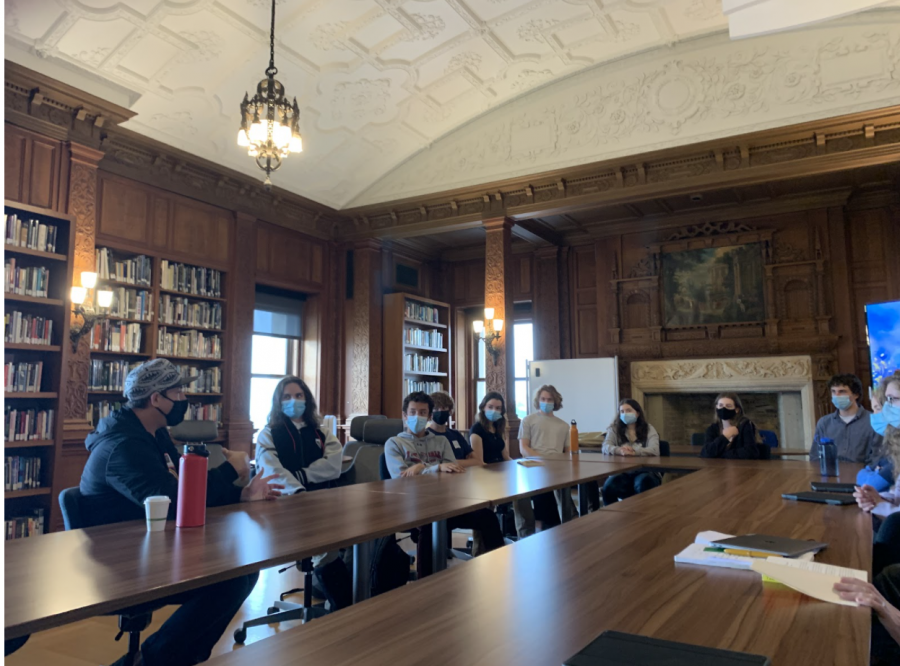 Visiting author Tommy Orange speaks about his novel to students in the Williams Library. After the assembly during H block, juniors got the chance to have a one-on-one Q&A with him.

WEB EXCLUSIVE | Yesterday, all students gathered in an assembly to listen to author Tommy Orange reflect on his new novel, There There.

“It was really interesting to hear all the questions that students had for Tommy,” sophomore Claire Abel said. “Being there in-person and hearing his experiences and opinions firsthand was a super insightful experience.”

There There is a 2018 novel taking place in Oakland that tells the story of a series of Native American characters preparing for a Powwow. The novel tells the diverse background stories of each character and their own experiences growing up surrounded by Native American heritage.

“Last year, I offered There There to my class of sophomore boys as an extra novel, and they loved it so much that I was quite inspired,” English Department Head Sharanya Naik said, “It’s not the sort of novel we usually teach so I was quite nervous about how students and their parents might react, but the power of the storytelling came through so strongly that those issues were easy to talk about in context and of course of deep interest to my students.”

At 10:40 a.m., sophomores, juniors and seniors attended the assembly in Syufy Theatre, while freshmen observed through a live zoom meeting from their advisory meeting spaces. Students then attended their H period classes at 12:40 after a school-wide lunch period.

The assembly was important for the school community because it allowed students to hear from someone who has had a wide variety of life experiences, according to junior Emma Chongo, who had the opportunity to speak with Orange on stage during the assembly.

“He was able to be very creative and use his story to better his life as well as those around him and that is super powerful and special,” Chongo said. “It was a great opportunity to reflect on a deeper level.”

“I read There There this summer and absolutely loved it,” Abel said. “It’s really important that the school is honoring Native American voices and displaying these different perspectives.”