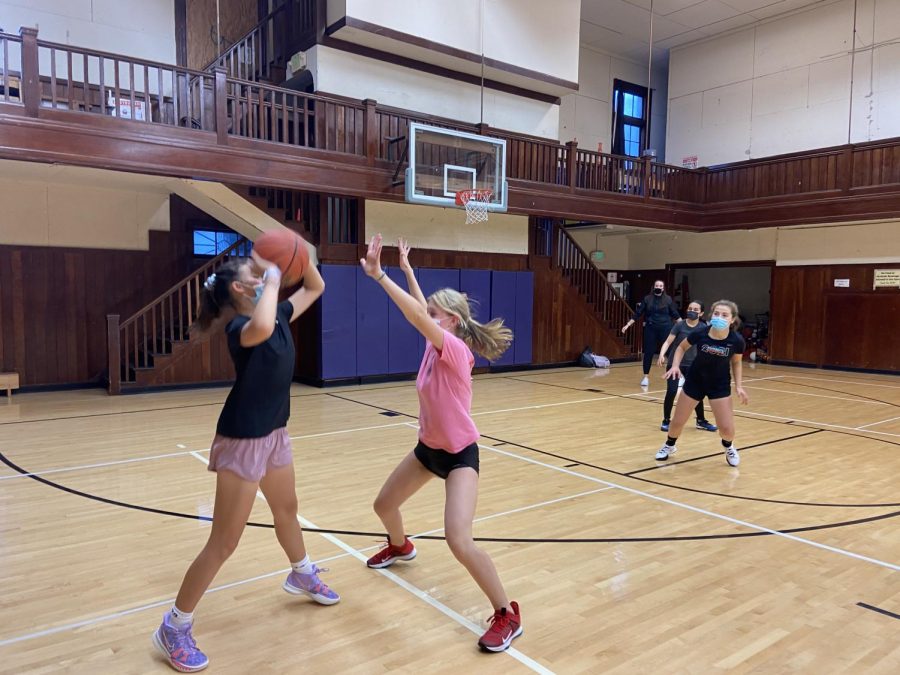 Freshman Ava Engle protects the ball from junior Roxanne Comerford today at basketball tryouts. Tryouts began Monday and will be held until Friday.

WEB EXCLUSIVE | While fall sports like volleyball and cross country continue into the postseason, winter athletes kicked off their season yesterday with basketball and soccer tryouts.

“I’m excited to see all of my returning teammates from last year because we had such a great time playing together,” senior Madeira O’Donnell said. “Now that the season is full length, I believe that we will become a stronger and more meshed team.”

This week of tryouts is meant to allow coaches to assess the players’ athletic abilities and skill level. Practice times range from 3:30 p.m. to 5:30 p.m. or 5:30 p.m. to 7:30 p.m. every day depending on the sport and the team.

“Different coaches have different coaching philosophies in terms of team dynamics, but in general, we look at skills,” said Athletics Director Dana Kuwahara. “We look at players’ dedication, we look at leadership. Those types of things can play a role in making up a team.”

Players are given the opportunity to demonstrate not only their physical capabilities during tryouts, but also their attitudes on the court. Team sports create a community environment that connects students from multiple grade levels, according to freshman Kaiya Koenigsberg.

“Sports are something that bond people together, especially playing as a team for five or more days a week,” said Koenigsberg. “As the season progresses, I’m sure the team will become tightly-knit and in-tune with each other.”

A higher level of participation from new athletes creates more opportunities for competitive team play and programs are expanding this season because of this recent influx of interest, according to Kuwahara.

“We’ve definitely seen a lot of participation coming from the freshman class,” Kuwahara said. “Maybe it’s an effect of COVID, but more people want to come out, so our teams are seeing larger numbers this year.”

“I am most excited to see how far this team will come now that we have two teams,” O’Donnell said. “I’m looking forward to meeting new players and getting to bond with everyone during the season.”