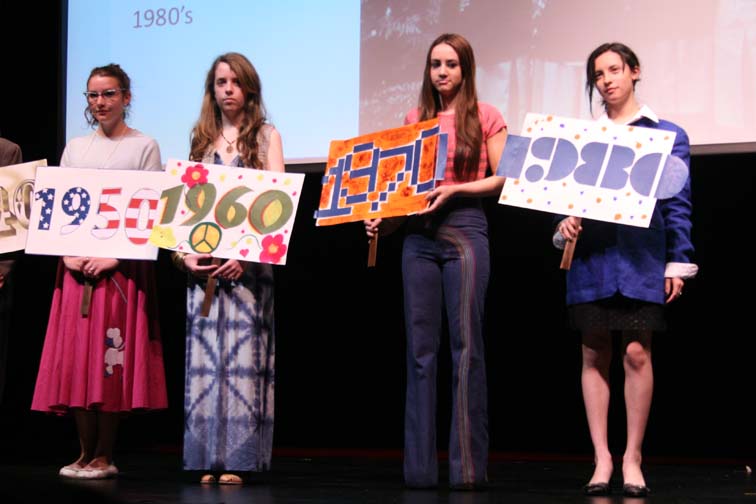 The influences of women on society and the challenges they face today were summarized in a full-school presentation by the Women’s Studies class yesterday in the Syufy Theatre.

“We are the voice for women from the past, present and future,” said senior Emily Ward. “We will be heard.”

The class defined feminism as a social and political advocate for the rights of women to be equal to men, then continued with calls for women to have confidence in themselves and avoid self-esteem wounding traps of modern society.

“I really enjoyed the presentation,” said sophomore Natalie Sullivan. “I thought it was accurate, honest and shows how much the media and image of beauty affects girls today.”

Video clips and photos from the past 100 years showed the transforming image of women over the century, paralleled by specific clothing styles and Convent uniform for each decade from 1900 to the present day.  Seniors wore costumes and held posters to designate their time periods. They created a vibrant spectrum on the stage with a flapper from the 1920s standing in the same line as a student donning a 1950s bright pink poodle skirt.

The presentation took on a sobering tone as a video flashed clips of young girls claiming they were ugly or needed to be skinnier.

“[The performance] influenced me in looking at how women changed throughout the years and how our points of views have changed,” said freshman Sophia Sanchez. “I didn’t know that [societal pressures] affected younger girls and how they diet and focus on their appearance all day, every day. Fifty percent of nine year old girls should not have been or presently be on a diet,” she added, quoting a statistic from the film.

The influence of media is rising, as Americans spent almost $11.8 billion on cosmetic procedures last year and American women spent $12,000 on cosmetics and grooming. But the Women’s Studies students encouraged their peers to look beyond expectations of physical beauty and take pride in inner qualities.

The performance also included video showing faces of noted women over the ages morphing from one photo to the next.

“All of the famous women’s faces meshing into one another gave a great scope of what our culture saw and sees as beautiful,” said junior Elena Dudum. “It’s an odd idea that beauty is ever changing because that suggests that it will never be constant and individuals will never see beauty in the same light.”