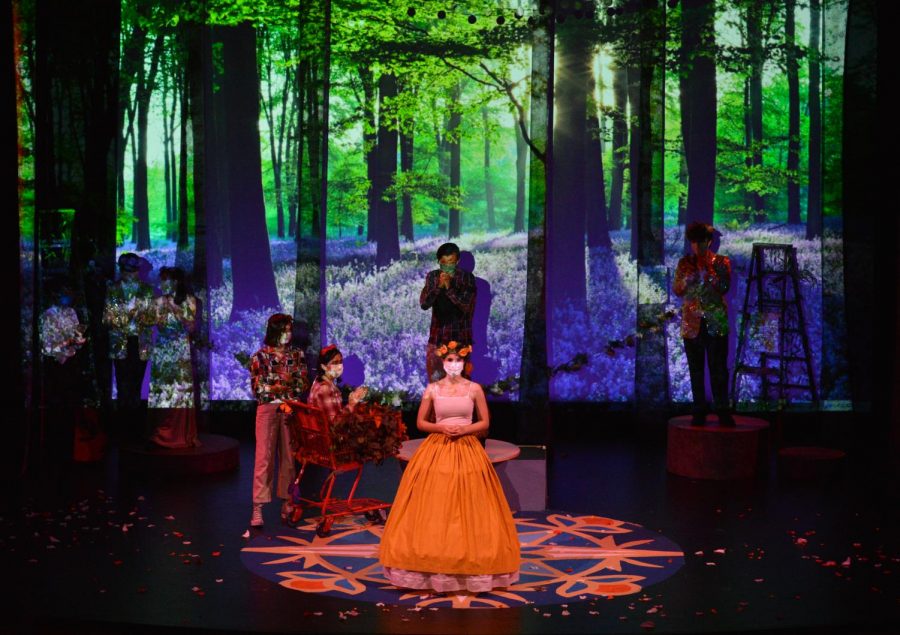 Lead role Rosaline, played by junior Grace Stermer, and the rest of the cast gather for the final scene on the opening night of As You Like It. Due to previous COVID-19 restrictions, this is the high school’s first in person theater production in nearly two years.

WEB EXCLUSIVE The theater department kicked off the fall season with a production of William Shakespeare’s As You Like It.

“I’ve been working on the play since September, and it was a fantastic experience,” sophomore Sarah Rasic said, “I really enjoy Shakespeare because it has a deeper meaning.”

As You Like It is a whimsical comedy recounting the tale of heroine Rosalind, played by junior Grace Stermer, and her escape from persecution at her uncle’s court as well as her journey through the Forest of Arden, where she encounters love and friendship.

“When I was 15, I saw As You Like It in London and it changed my life and convinced me that that theater was what I wanted to focus on and pursue,” Theatre Program Director Margaret Hee said, “It is a joyful play that explores themes of gender roles, power, freedom and love.”

The cast has been rehearsing since September and the practices occur from 3:45 to 6:30. The play ended up lasting for one hour and 30 minutes.

“I went to the play on Thursday,” Freshman Ellie Rosa said, “It was my first high school play and my friends were acting in it so it was really exciting to see”

It was the first high school theatre production open to the kindergarten audience.

“I am most excited about having all the students back together in person,” Hee said, “They have all been so kind and supportive of one another, every rehearsal has been full of joy.”

As You Like It was the first in-person theatre production in nearly two years. Performances were open to all vaccinated students, faculty, and members outside of the school community as well. For those who preferred remote viewing, live-streaming and recordings of the performance were also available.

“I love theater because it gives you the ability to act and collaborate with others,” Rasic said, “It’s an opportunity to work with others and fall in love with the character you’re playing.”