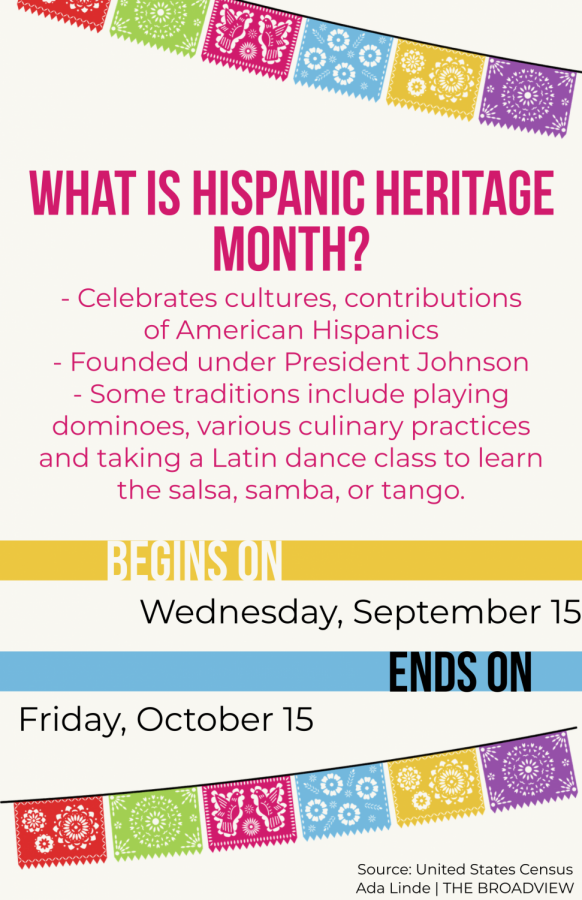 WEB EXCLUSIVE Students and faculty are currently taking part in learning about Hispanic Heritage Month, a celebration dedicated to the Hispanic community in the U.S.

“Hispanic Heritage Month is important because it educates people around the world about how American LatinX people carry their Hispanic heritage and culture,” sophomore Brynn Slattery said. “It’s really important to know about other countries’ and cultures’ histories, especially in this day and age.”

National Hispanic Heritage Month lasts from Sept. 15 to Oct. 15 and celebrates the histories, cultures and contributions of American citizens whose ancestors immigrated from Spain, Mexico, the Caribbean, and Central and South America, according to the United States Census.

“I need to work on including Hispanic Heritage Month more in my classes,” Spanish teacher Diana Bolaños said. “Although I think Spanish class should be a place where we learn more about these cultures every day.”

Bolaños’ Spanish II classes are presenting on various celebrations surrounding the month. Their project centers around the origins of these traditions and how they have been integrated into American culture.

“Hispanic heritage month is being taught in my Spanish class as we dive further into the traditions and practices as well as the history of the culture,” said POSCU member Frida Cruz. “It’s important for me to celebrate so I can stay connected to my roots and feel closer to my background.”

Hispanic Heritage Month was originally observed as “Hispanic Heritage Week” under President Lyndon Johnson, but it was later extended to a month during President Ronald Reagan’s term in 1988, according to the U.S. Department of Education.

“To me, Hispanic Heritage Month is important, but I think it’s more important for people who are sons and daughters of immigrants,” said Bolaños. “There are a lot of Latino people that have done a lot of good things for this country, and it’s really important to celebrate and commemorate them.”

It’s not just important for ethnic Hispanics to celebrate, though, according to Cruz.