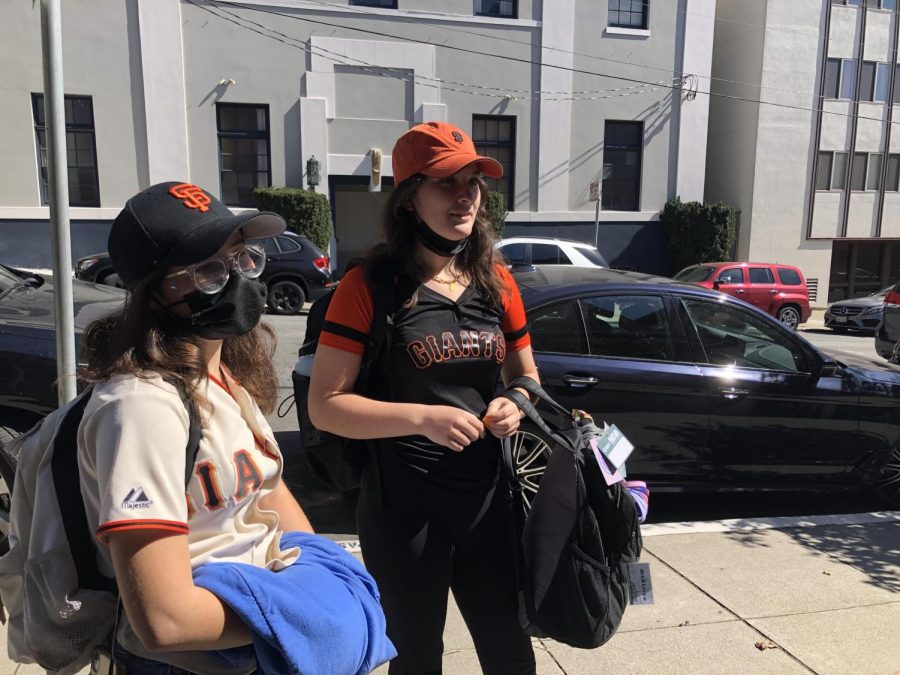 Juniors Makenna Kramer and Keira Blattberg sport their Giants merchandise while waiting outside of the Pine Octavia campus. Today was the first game of the National League Division Series and the Giants won 4-0 against the Los Angeles Dodgers.

WEB EXCLUSIVE As students arrived at both the Broadway and Pine Octavia campuses this morning, bright orange and black outfits could be seen throughout the school.

The school community celebrated a San Francisco Giants themed day in honor of the playoff game tonight where the Giants faced off against the Los Angeles Dodgers. This was the first game of the National League Division Series and also the first time the Giants and Dodgers have played against each other in the playoffs.

“I went to my first Giants game when I was eight, and have gone to two recently,” sophomore Brennan Damond said. “The season has been really fun because the Giants are doing really well this year.”

In an email sent out to all grades, Convent Student Body President Jennifer Surjadi encouraged the entire community to sport Giants gear or any orange and black clothing to show their spirit and pride for the Giants.

“I was a hardcore Giants fan when I was little and played baseball myself,” senior Shelby Low said. “I’m very excited about the playoffs and I know we’ll beat LA.”

The final outcome of the game was the Giants victory with a 4-0, the Giants had a .660 winning percentage to the Dodgers who had a .654 percentage. Many students were excited not only to support the team at school but also to cheer them on by later watching the game at home or in-person.

“These spirit days are a really good way to bring us all together,” Damond said. “The Giants theme was a great way to show some spirit for our city as well, I really liked it.”