Diving back in the bay 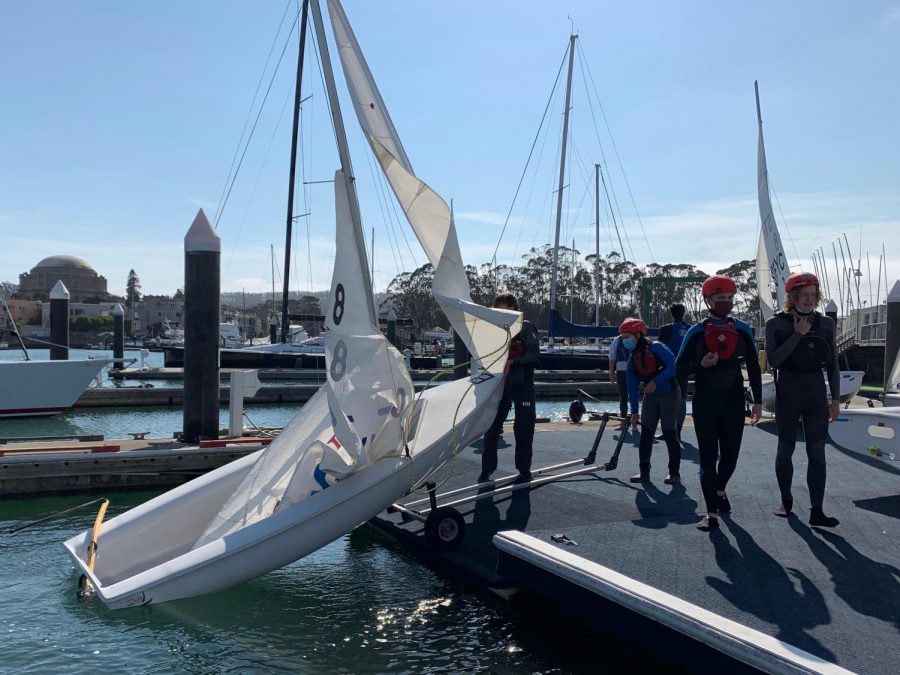 With fall sports in full swing, the Convent & Stuart Hall varsity sailing team has returned to the bay for the first time since the COVID-19 pandemic.

“When we get to the St. Francis Yacht Club, we do a briefing where we talk about what we’re going to do for the day,” senior Cristina Jackson said. “We are on the water for two hours and then we come back in, talk about what we learned and what we can do differently for next practice.”

Sailing is not only a time commitment, but also a physical one, according to junior Audrey Roomian. The team recommends its members to regularly work on their upper body strength outside of practice.

“Strength training is so important because there have been a couple times where I have been stranded out in the ocean and needed to get back in my boat,” Roomian said. “Keeping fit for the team and for the season is definitely something that needs to be done.”

New and returning sailors are entering the season in anticipation of a variety of things.

“I’m looking forward to getting a good experience in sailing,” sophomore Natalie Tonkovich said. “For example, learning how to sail better and getting to know people from other grades.”

“This is my first year on the team,” Roomian said. “I started sailing my freshman year, kept doing it on and off and then pretty much did it every week during the spring semester of my sophomore year.”

“We were constantly preparing for what was coming next,” Athletic Director Elena De Santis said. “We had testing on site throughout the school which was great, so as soon as the league and the county said everything was okay, our department was ready to start any sport.”

The varsity team competes in the Pacific Coast Interscholastic Sailing Association and had its first regatta on Sept. 19 at the Richmond Yacht Club.

“The way regattas work is that instead of competing against one other high school like a normal game, we compete against other yacht clubs and their high school teams,” Roomian said. “The first regatta went pretty well overall, especially for a first regatta.”

Due to the pandemic, the sailors will only have one coed team instead of a junior varsity and varsity team this year, according to Jackson.

“The community and the excitement from all the sailors that I’ve been with is just really nice,” Jackson said. “Being really excited about the sport makes it really fun. I love being out in the water.”