San Francisco tradition continues after a year of quiet skies 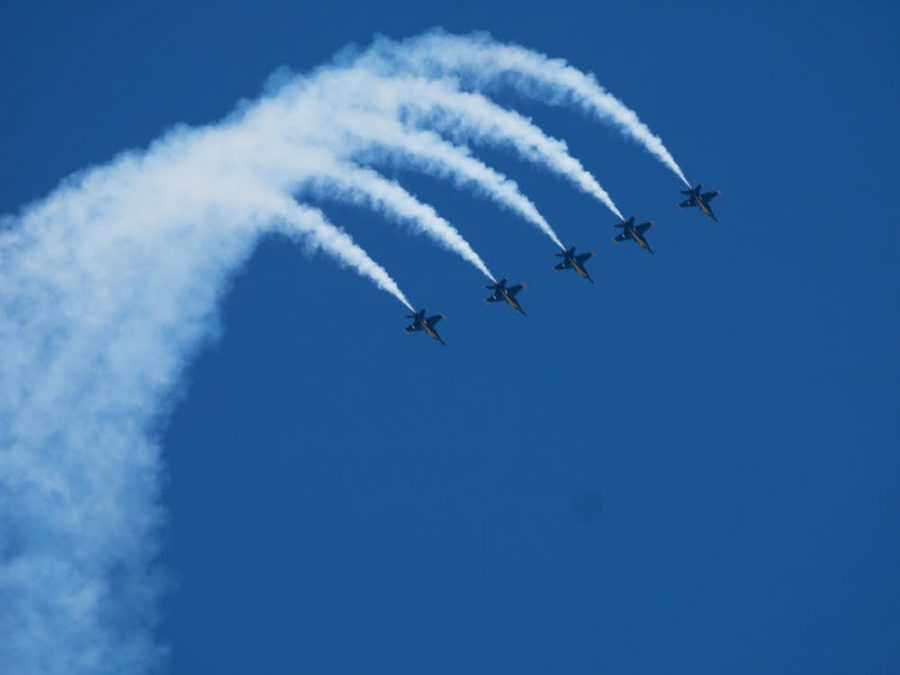 The Blue Angels take flights and perform a choreographed routine in their 2014 fleet week performance. Fleet week has been taking place in the Bay Area since the 80’s and is one of over 11 around the country.

San Francisco Fleet Week kicks off on Oct. 3, with a parade of Navy ships, boat tours, and eight different air show performances including the Blue Angels.

Fleet week has been a Bay Area tradition since it’s implementation in 1981 by then-mayor, Dianne Fienstein. The tradition will return in-person again this year after last year’s virtual celebration.

“I’ve maybe only gone to the full air show once, however I watch the Blue Angels every year,”  junior Emma Chongo said. “They’re so loud you can barely hear yourself think but it’s such a cool experience.”

The Air Show Network, the company who produces Fleet Weeks around the country, has a production team that is roughly 50 percent women. Which is relatively uncommon in such a male dominated industry like aviation according to Mary Breen, director of PR and marketing for The Air Show Network.

“Within the last 10 years you’ve had a really significant presence of women on our management team,” Breen said. “It’s been wonderful for me to have these women as mentors and now I get to help inspire young girls to come out and see the air show, and see that there’s a career for them, whether it’s in commercial aviation, working in marketing for air show, being an air boss, or being a future Blue Angel.”

Fleet week lasts from Oct. 3-11, with the Blue Angels normally flying at 3 PM each day and performing for 40 minutes. The show in San Francisco takes place over the Bay and can be seen, and often heard, from all over the city.

“I normally go to my friend’s house by Marina Boulevard to watch the Blue Angels,” senior Chelsea Li said. “It’s a yearly tradition, we’ll go up to her roof and watch from up there, it’s such an amazing view because you can see everything.”

Since the postponement of last year, Fleet Week has changed certain aspects of the show, such as the new jets for the Blue Angels. This is the first time in 30 years that the Blue Angels have a new type of jet.

“New to the air show this year the Blue Angels have transitioned their jets from their legacy jets to now flying the F-18 Super Hornets,” Breen said. “It’s 25% larger than the predecessor jet and I see the Blue Angels fly about 30 times a year, and these new jets just do not disappoint, they’re absolutely incredible.”

The waterfront event is the only air show in the United States with a commercial airliner, United 777, to perform a choreographed act. The Fleet week events have recently expanded within the last couple years and now also include the new Fleet Fest which takes place on piers 30 and 32.

“I really didn’t know that there were so many activities and different components to Fleet Week until now,” Chongo said. “I definitely want to check out all the new performances and full event this year.”