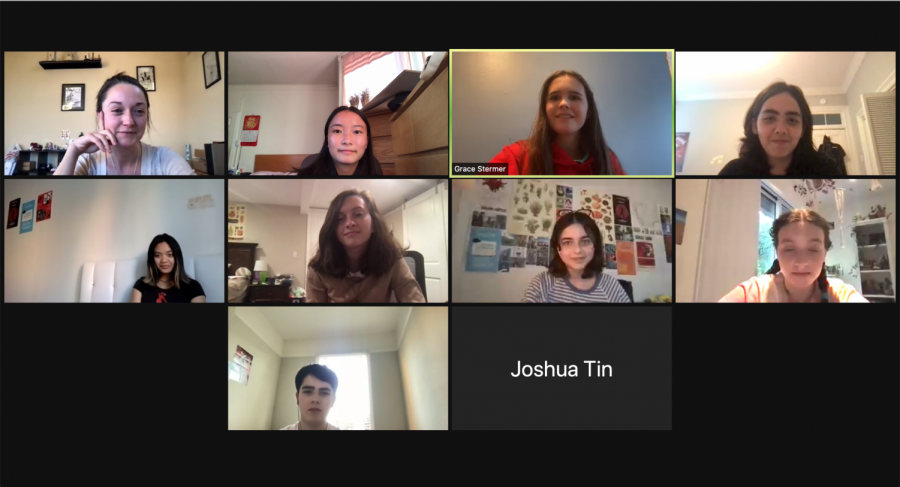 Junior Grace Stermer shares her interest in Junior Azadeh Reiskin’s performance proposal, a production of “Mr. Marmalade.” Students will lead, assist and participate in a variety of artistic projects.

WEB EXCLUSIVE | Student-artists met virtually via Zoom this evening to discuss their ideas for collaborative performances and exhibitions in preparation for the second annual Student Arts Workshop.

“The Student Arts Workshop is a program where students have an outlet to make their own creative projects,” sophomore Sarah Rasic said. “Teachers will be included in certain ways, but normally it is led by the students.”

The efforts of the Cabaret Club, a performance group led by members of the Class of 2021, inspired the first-ever workshop last year, according to the Arts Workshop’s supervisor, Theater Programs Director Margaret Hee.

“I saw that the students had a lot of artistic ideas that they wanted to create but they didn’t have the production supplies that they needed,” Hee said. “We wrapped up the visual and performing arts faculty into one to help students produce those ideas.”

The Arts Workshop is open to all those interested in a variety of activities ranging from dance to visual arts to theatrical performances.

“I’m hoping to direct a production of ‘Mr. Marmalade,’ a contemporary play, just as last year’s senior Anya Hilpert directed a production of ‘A Midsummer Night’s Dream,” junior Azadeh Reiskin said, “I’m looking forward to working with my peers in a new way.”

Today’s preliminary meeting offered guidelines for those, like Reiskin, who aim to submit a proposal for their ideas by Oct. 4. They will need to describe their art piece, the supplies required and the people they are looking to work with, according to Hee.

“The most successful experiences were students who had a clear idea of what they wanted to create,” Hee said. “We’re starting off early to discuss different artistic ideas and then seeing where these individuals fit into other projects.”

While rehearsals were held virtually last year, they will now take place in the Little Theater for the first time beginning Oct. 26. Performances and exhibitions for the workshop will run in the same space on Dec. 9 and 10.

“We’ve had plays, art being shown and people choreograph dances before,” Rasic said. “It’s honestly just an opportunity to express yourself creatively.”