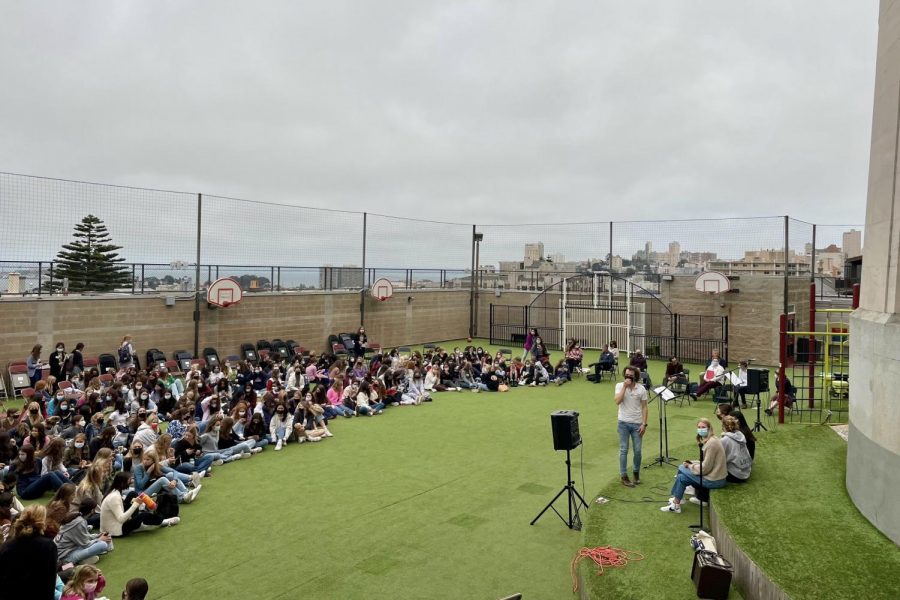 All grade levels gather on Syufy Court for the first chapel ceremony of the school year. The ceremony included the Calling of the Names, an introduction from the student council, and an announcement about the first school dance.

WEB EXCLUSIVE | After a year of experiencing chapel through screens, the entire school community finally gathered together for the first in-person chapel of the year.

“It was really interesting to see how our school talks about religion and incorporates it in an easy way to follow,” freshman Phoebe Brockway said. “I really enjoyed how students took charge and led the chapel. They made me feel welcome into the community through religion, which is really special.”

LIFE representative Maddie Drda began the chapel by sharing acknowledgements and leading Espacio. During the first chapel of each school year, the Calling of the Names takes place, a tradition in which each student’s name is called by advisory and all receive a blessing.

“Despite the change of being outdoors, we continued to celebrate past chapel traditions,” LIFE Coordinator Brian Lorentz said. “We announced this year’s theme as found blessings and participated in the Calling of the Names, all of which normally takes place in the Mary Mardel Chapel.”

Following CDC guidelines, chapel was held in an outdoor area. According to these restrictions, all large gatherings will likely remain outdoors for the foreseeable future.

“Chapel is such an important way for the school to come together to reflect and take a pause so it was nice to finally get to reconnect,” senior Natalie Stans said.  “We all sat on the grass, which to me was more fun than staying indoors in the chapel.”

Because of remote learning and the restrictions that did not permit large groups to gather in one space last year, today was the first in-person chapel for freshmen as well as sophomores.

“Being on Zoom was hard because we couldn’t see each other face to face in-person, so it’s nice to be back on campus to meet everyone,” Brockway said. “Chapel is important to me because it’s a chance to see everyone and to take time to be together.”