First day of academic year begins in-person for all students 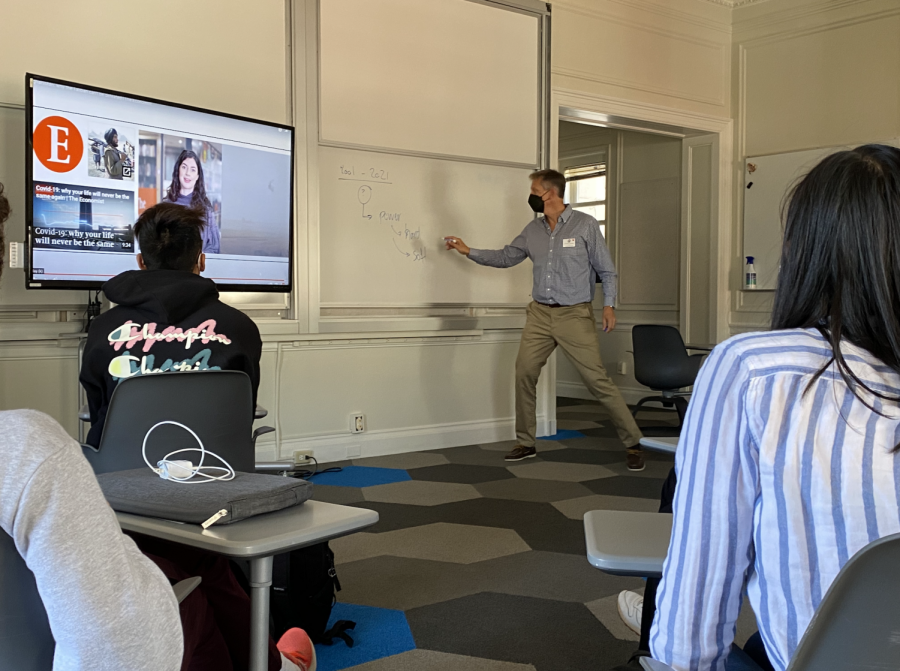 IB Global politics teacher Martin Jorgensen shares a video about conflict in the Middle East during class. Many teachers went over syllabi and introductions of the course to prepare students for the school year.

WEB EXCLUSIVE Today marked the first day of the 2021-2022 school year. Many changes have come with the start of the year including a new schedule and complete in-person learning.

The new schedule features red, blue and green days, with time specifically built into the schedule for community programming on green days.

“I definitely think that the new schedule is already better than the one we had last year,” junior Isabella Mercado said. “I like how the days are spread out into a rotation because I think it will make me less stressed out about getting work done on time.”

The school year began with Freshman Success for ninth graders, a two day event allowing incoming students to familiarize themselves with the campus and new classmates. Several new students attended Convent Elementary, however many of them have found differences in the high school, according to freshman Taylor Jones.

“I enjoyed my first day of school even though I have only one class and a free period on green days,” Jones said. “My other six classes are on red and blue days and I’m looking forward to them and also getting to know my peers and other teachers.”

Alongside the new freshmen, many new faculty members have been welcomed into the community on their first day.

“You don’t necessarily know what to expect on the first day teaching at a new school, so it can be pretty daunting,” history teacher Martin Jorgensen said. “With both of my classes I tried to get a sense of what students already knew and they wanted to learn, to make the class more interesting.”

Setting a routine and adapting to the new schedule is going to be the best way to get settled with the schedule and thrive, according to Mercado.

“Each scheduling format since freshman year has had its own quirks and things I like or don’t necessarily like about it,” Mercado said. “I think that this years’ seems more promising because of the way it’s structured.