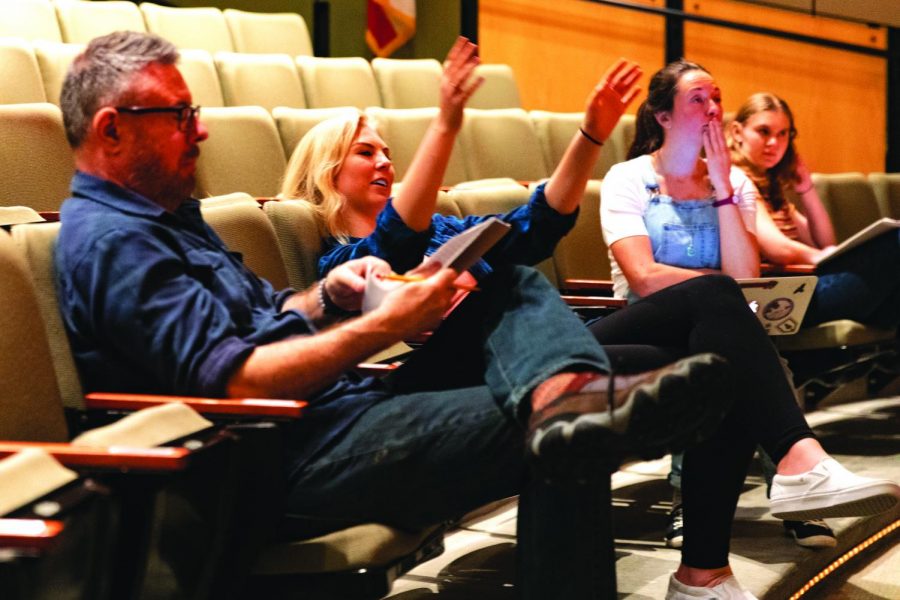 After she was transferred into the theater class in the middle of seventh grade, it was too late for Anya Hilpert to join the cast, so she became stage manager for the school play.

“This position really sparked my love for the technical side of theater,” Hilpert, who is now a senior, said. “I knew I wanted to go forward into high school as a stage manager.”

“It was a mix of the two things I loved,” Hilpert said. “After directing some plays, I noticed that there weren’t a lot of opportunities for kids at our school to do student-read work.”

“Anya is such an advocate for theater and her passion for theater is infectious,” Hee said. “I think that she’s actually been integral in helping to grow our theater program.”

In addition to organizing virtual activities for the company, Hilpert helps with middle school productions while she works on personal writing projects.

“The first time I met Anya, it became clear very quickly that Anya had a real passion for theater,” Hee said. “She is someone with many of her own creative ideas.”

Hilpert was stage manager for “She Kills Monsters” for the high school last fall as well as the assistant director for the middle school play “The Skokie Detective Charter School.”

“Throughout my theater experience, I’ve been fortunate to have worked with a lot of incredible women, which has been a big influence on my decision,” Hilpert said about a future career in directing. “I have also worked at the Shakespeare Company that’s run by three fantastic women whom I adore and look up to.”

Hilpert says she wants to push forward the goal of increasing diversity within the theater community, encouraging everyone to see themselves as both actors and audience members.

“Oftentimes, I feel that we look at theater as this really wonderful and inclusive space,” Hilpert said, “but I think that we have a long way to go until we’re there.”

Hilpert says she keeps in mind inclusivity and diversity not only within her casting process but with her creative team of lighting designers, costume designers and stage management teams.

Hilpert is interested in pursuing an education that teaches her how to grow and change with the industry that she’s been trying to get to.

“Most schools do not allow you to apply early for theater, so all of my college decisions will be coming out in about a month,” Hilpert said. “I’m planning on going directly into college for directing to spend four years on that, and then hopefully I will continue to get a master’s degree in directing.”