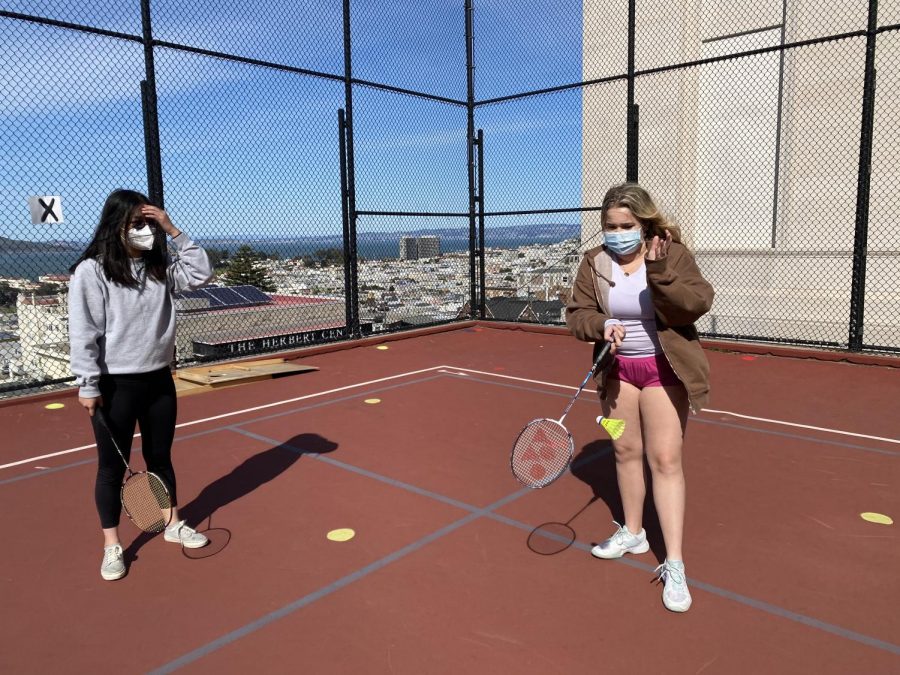 Chelsea Li and Sloane Riley practice badminton outside on the Highlands Court on the Stuart Hall for Boys campus. Season 2 sports started on March 22 with indoor sports like badminton moving outside for practices and games.

Teams are having to adapt to new safety protocols and spaces, as indoor sports move outside for the start of the second sports season which started on March 22. Players say they are excited to begin practice and hope that teams will be able to hold competitions for indoor sports.

“I know that there will be changes to keep everyone safe, but I always joke that fencing is the perfect COVID sport since you never touch,” sophomore Sophia Wu said. “I don’t even know if we will be able to compete against other schools, but I’m mostly just happy we get to fence.”

There has yet to be any clearance for indoor sports, which means that sports like fencing and badminton will have to be held outside until San Francisco moves into the Orange Tier, according to the Department of Public Health.

“I think for badminton at least, it wouldn’t be bad to play inside,” junior Sloane Riley said. “As long as we keep windows open — it’s already a pretty well spaced out sport — and it’s not much different than being inside at school all day.”

Coaches are working to develop plans that will allow all sports to practice and compete. Plans for indoor sports are still taking shape, according to Head of Athletics Dana Kuwahara.

“We are working out how these sports will practice outside,” Kuwahara said at a meeting for students playing in the second season. “For fencing, we might have to wait till you are inside to compete, but you should still be wearing your mask at all times.”

“I think that’s a pretty reasonable rule just given that you’re like 50 or 100 feet away from your opponent,” Riley said. “I play singles, so I’ve played games without my mask and feel comfortable as long as everyone follows the guidelines.”

Carefully following the rules will mean athletes can remain safer and sports will be able continue.  Convent athletes are excited that a new season is possible, according to Wu.

“I’m just excited that we get to have a season at all and that our school is doing a good job at following guidelines and keeping everyone safe,” Wu said.