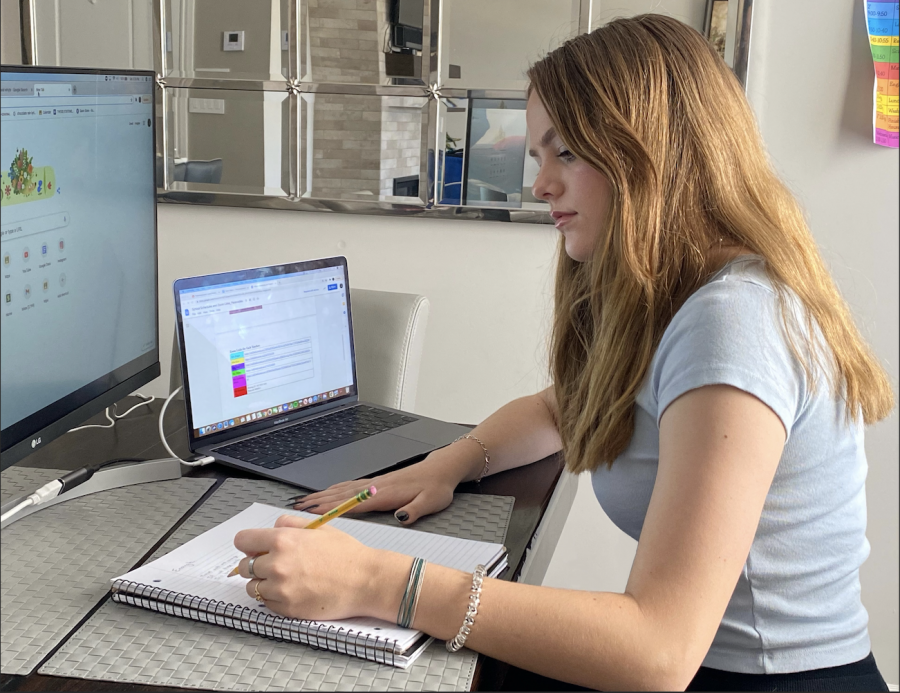 Junior Natalie Stans works on her submission at home for the annual Poetry Festival that will be held virtually next month. Her poem was about the biggest influences in her life.

April’s annual Poetry Festival will be held virtually and will feature a San Francisco-based poet as its guest judge.

Julie Bruck, who will select the school-wide winning poem, won the Governor General’s award from the Canadian Council for the Arts and has been published in “The New Yorker” and “The Walrus.” Bruck teaches creative writing for adults at the Writing Salon in San Francisco.

“For me writing is a survival mechanism,” Bruck said. “It’s the way I negotiate my way through the world and without it I’m lost. I’ve judged for many national contests, book contests, radio contests. It’s fun to get a real sense of what people are doing and feeling through their writing.”

The festival is an annual community-building event that the English department especially wants to continue during the pandemic, according to English teacher Emily Brenner.

“Participating in this contest is important for students because it acts as a creative outlet and a place for students to express themselves through any form of writing,” junior Shana Ong said. “This festival has definitely brought the community together because of the encouragement from other students and the support after hearing the poems.”

Besides reciting poetry, comedy roasts, dramatic readings and promposals have also been aspects of the Poetry Festival in the past.

“Kiki Apple (’19) performed a slam poem where she roasted the school and the administration about the division between IB and AP,” senior Gigi Moulia said. “Mr. [Tony] Farrell responded by roasting the student body. This festival has been an opportunity for students to open up about their opinions openly and free of judgment and share them with their peers and teachers.”

Engaging with the poems rather than focusing on the contest and striving to be “the winner” is key, according to Bruck.

“Aside from community recognition, all winners receive a certificate while finalists get a surprise award, which in the past has been a plaque or a book,” English teacher Julia Arce said. “This contest is the one time where you’re not graded for your work, and it gives a sense of ownership and sharing which can be very exciting.”

The judging process within the English department can take a few days, according to Arce.

“The criteria judges often look for is qualitative,” Brenner said. “The student should show a vivid use of language that is descriptive perhaps through sensory, image, narrative, or a comedic element.

Taking inspiration can be difficult for some students, so the English department shared a Google Doc with poetry exercises to help guide students through their submissions.

“I participate every year because I think writing poetry is a great creative exercise and it’s not something we get to practice a lot in our English classes,” senior Kate Baker said. “I love how  last year’s winners read the opening poems, and I like that some students can volunteer to read their own works.”

Poetry can be in demand after a world crisis such as COVID-19 or the 9/11 attacks. During these crises, Bruck found herself reading more works by Audin and writing about the events.

“Every time we have a collective crisis in this country we turn to poems,” Bruck said. “After 9/11 it was extraordinary how there was this huge outpouring of poetry. I’m excited to see what people are writing in the wake of what they’ve been through. It was a year of many kinds of upheavals, and I’m excited to find work that has discovered itself and its excitement coming off the page.”