Non-dairy alternatives have their heyday 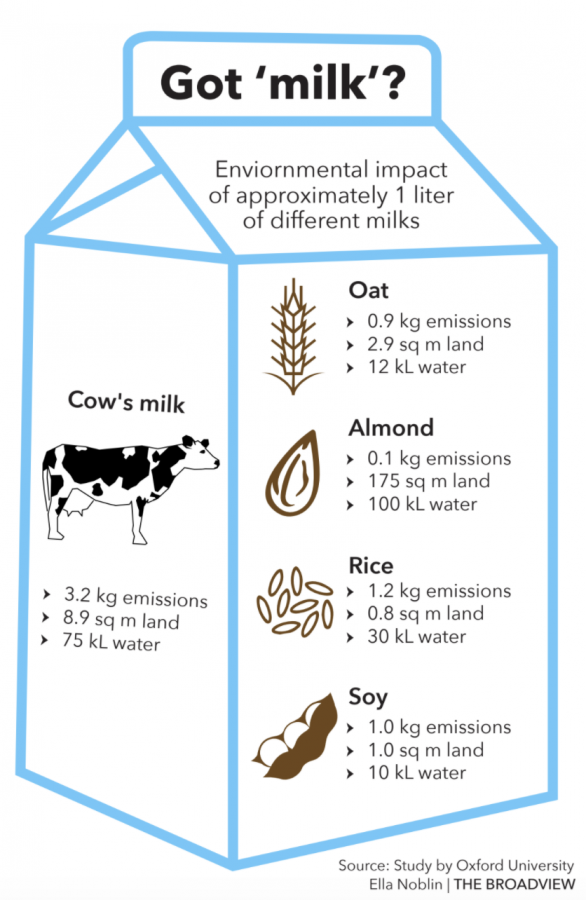 The rise of the clean eating movement, consumers seeking more sustainable food sources, and teenagers questioning whether dairy milk is “good for them,” have consumers bypassing the dairy cases and looking for milk alternatives.

Most grocery stores and even coffee shops are offering their customers “milks” derived from almonds, coconuts, soy, oats, cashews, cauliflower and even pea-protein.

“Alternative milk has become more prevalent in grocery stores,” senior Sarah El Qadah said. “I had always felt a bit groggy after drinking dairy milk, so I decided to try it out and I honestly love the taste and feel better when I drink it.”

The rise in plant-based diets, such as vegan and dairy-free diets, or for many, lactose intolerance, is contributing to the growing popularity of milk alternative products in the past few years.

Approximately  68% of the world’s population is lactose intolerant, according to the National Institute of Diabetes and Digestive and Kidney Diseases.

“I think a lot of people are realizing that they don’t metabolize or digest dairy efficiently,” registered nutritionist Camilla Beevor said. “Plant milks give an alternative to people who can’t drink a traditional cow’s milk.”

Many milk alternatives are fortified with vitamins and minerals that are present in cow’s milk such as Vitamin E, Vitamin D and calcium, but these vary on each type of milk, according to Natalie Lesdema, an integrative registered dietician nutritionist.

“Besides soy milk, alternative milks usually won’t be as rich in protein as your traditional cow’s milk,” Lesdema said. “Most alternative milks will give some carbohydrates and a lower amount of fat, however it depends on the brand.”

Aside from nutrients, consumers should pay close attention to the ingredient deck, according to Lesdema. A long list filled with unfamiliar words may not be the cleanest choice.

“I try to use options for the non-dairy milks that are organic and unsweetened so there aren’t any added sugars,” Lesdema said. “I find certain brands to be a little cleaner than others in terms of gums and thickeners that are added in some of the more common brands.”

Malk Organics, Three Trees Organics and Elmhurst 1925 have simpler ingredients, but they may be harder for consumers to find, while more popular brands like Califia Farms, Oatly, So Delicious Dairy Free, Ripple Foods and Good Karma Foods are sold in most grocery stores.

Each milk alternative product has different properties that can be appealing to consumers for different end uses. Oat milk is regarded as closest to traditional milk in texture and taste, and it froths like regular milk, according to Refinery29.

“My favorite alternative milk is either almond milk or oat milk,” senior Ella Holiday said. “I use almond milk in cereal, baked goods and in coffee. I use oat milk plain because I actually enjoy its taste.”

Alternative products can have an environmental benefit as traditional cow’s milk leaves a significant carbon footprint, based on the amount of land and resources required for raising cows as well as the greenhouse gas emissions cows release, according to WorldWildlife.

“Every type of milk, plant-based or not, will have some sort of negative environmental impact,” Bryan Lorentz, Ethics & Morality teacher, said. “Alternative milks generally leave a softer carbon footprint than dairy milk.”

A glass of regular cow’s milk generates three times more greenhouse gas emissions and requires nine times more land than milk alternatives, according to a 2018 study by the University of Oxford, but each milk alternative leaves some sort of agricultural footprint.

“Across the board, it is important to find a source of milk in your diet, whether it’s plant-based or cow’s milk,” Beevor said. “It’s important to know that when you choose to use plant-based milk, you don’t escape the farming practice of a cow’s milk.”