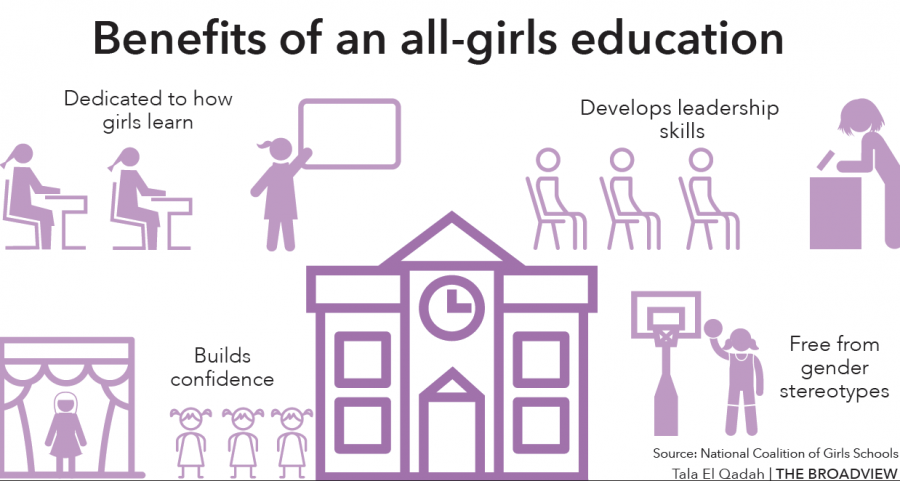 Speaking up in a coeducational environment can be challenging and unmotivating but, an all girls-environment can result in girls becoming more empowered.

“I have been going to Convent since kindergarten and we were always encouraged to participate in class, which is something I would have been afraid to do in a coed environment.” senior Hallie Williams said. “The all-girls education and environment has definitely made me more confident.”

More than 93% of all-girls school graduates report they were offered greater leadership opportunities than peers at coeducational schools, and 80% have held leadership positions since graduating from high school, according to the National Coalition of Girls Schools.

“I was always shy before attending Convent, but going there opened a lot more opportunities and I am much more outspoken,” Katy Baroni (’89), the mother of sophomore Mia Baroni said. “There are really amazing people I went to school with that went on to do really amazing things like writing books or directing documentaries.”

Roughly 87% of girls at single-sex schools report that they feel that their opinions are more respected compared to 58% of girls at coeducational independent and public schools, according to NCGS.

Mia Baroni, who has attended both coed and single-sex schools, says that a single-sex education has changed her life and allows her to speak up in class discussions.

“Having a tight-knit community and all-girls classes really changed my life,” Mia Baroni said. “I enjoy going to school much more than I used to and now am comfortable with speaking my mind in class.”

Women constitute 45% of the workforce, and yet their participation in leadership roles remains low, according to the United States Bureau of Labor Statistics.

“As women, we still face the fact that there is underrepresentation at the highest leadership levels,” Head of School Rachel Simpson said. “An all-girls education, where girls get to occupy all of the space intellectually, is a really powerful model out of what we want to see in terms of representation in our world that is still not all the way there yet.”

Sacred Heart Schools were established during the French Revolution in 1800 by St. Madeleine Sophie Barat whose mission was to educate young women to elicit social change.

“The school was founded by a strong, independent, smart woman who believed that education was the key to success, and she focused on educating girls so that they would have equal footing in the real world,” Freshman Grade Chair Sarah Garlinghouse (’94) said. “Being able to witness and see unbelievable potential from teaching girls has always been a delight and I am always struck by how much they end up teaching me during the process.”

Assuring that Convent’s history program is saturated with contrasting stories and multiple perspectives, including woman’s opinions, rather than a singular male belief, is vitally important, according to Simpson. An analysis of America’s recent history books shows 75.8% were written by men, according to National Archives.

“When we look at history, we look into the past as a means of moving forward into the future,” Simpson said. “We want to learn from those whose narratives have shaped the past and we want to hear about women’s perspectives and stories.”

Single-sex education greatly impacts students and allows them to be the center focus in a class environment, according to NCGS. Williams says that the experience at an all-girls school has prepared her for the future and allowed her to challenge herself more.

“The environment and community at Convent has really allowed me to step out and try new things,” Williams said. “There are many things I have done in the past years that I wouldn’t do at a coed school.”