Focus on the self increases through Zoom 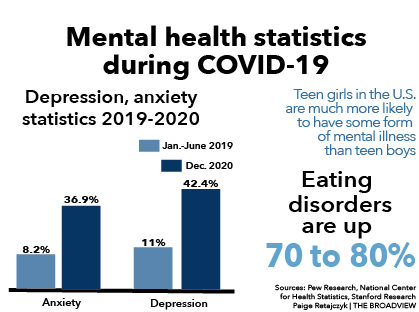 With the inability to go out with friends or participate in sports, many teens are suffering mentally and physically from being isolated for a year.

“The two largest upticks that we’ve seen in terms of psychological disorders are depression and anxiety,” Stephanie Rooney, a psychologist practicing in San Francisco said. “While we don’t yet have data that suggests that it has, it certainly makes sense that seeing yourself on a screen for hours every day could make someone self-criticize looks, awkwardness, or this sense that there’s something wrong.”

Eating disorders are up 70-80% in the recent months, according to a study from the National Eating Disorder Association.

“I would postulate that some of this might be tied to feeling more self conscious because of the focus on yourself on a screen,” Rooney said. “It’s important to remember that it’s understandable that we might feel more self-conscious.”

The focus on a screen through Zoom has caused individuals to be self-aware of themselves and others around them as well as being extremely critical, according to Stanford researchers. Some ways to solve this is using the minimizing or hide self view feature on Zoom.

“It’s hard to look at myself for long periods of time, especially when it’s bright and early and I don’t feel good about myself,” junior Natalie Stans said. “Some things that I do is either tilt my camera away from my face or even use the beauty filter Zoom offers.”

For those online, keeping a routine can be helpful whether that is working out, putting on makeup, or even putting on a good outfit rather than sweats, according to Chawla.

“I think that I’m slightly less productive over Zoom, but not by much because I still have the same amount of work to get done,” junior Mira Chawla who has been distance learning for the whole school year said. “One thing that is different from Zoom than in-person is that I get less physical activity because I’m not walking between campuses or doing sports.”

A normal part of being a teenager is growing awareness of what and how one’s body is changing and what one looks like, according to Rooney.

“There was so much focus in the beginning of the pandemic, on using this time to be productive, get fit, that that created a self-consciousness, like ‘I’m supposed to get really fit right now because I have all this time,’” Rooney said. “That made people feel really more aware of their bodies and might contribute to poor self-image and poor body image.”

Despite being in-person or online, seeing friends socially distanced or getting outside can be beneficial for mental health but also gives some sense of normalcy, according to Chawla.

“You’re more likely to be positive and happy if you spend more time doing and practicing mood boosting activities,” Rooney said. “Surrounding yourself with people who are good for your health, good for your self-esteem, who helps shift that focus off of looks and image.”