Hate groups use classical writings, culture to justify their beliefs 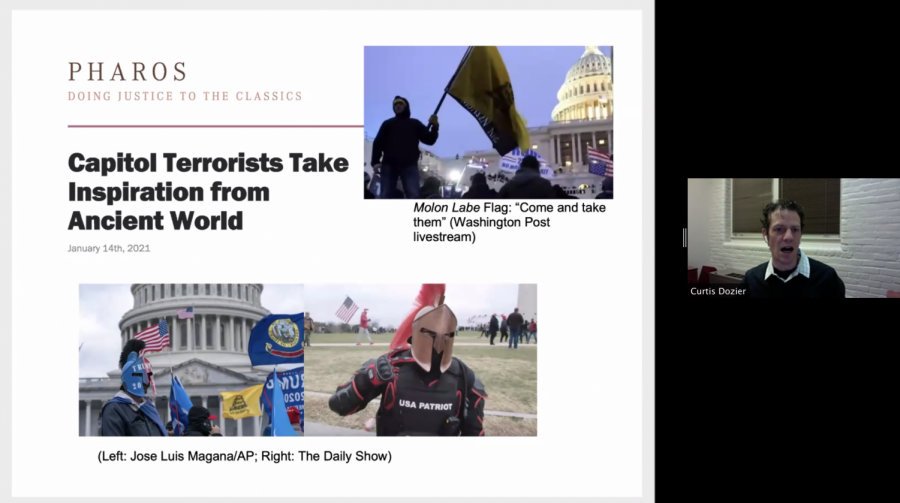 WEB EXCLUSIVE Hate groups and their use of Greco-Roman writings and culture to justify their beliefs was the topic of the annual Latin Lecture on March 4.

“It’s important when studying any culture to understand what that culture or these cultural symbols originally meant,” Latin teacher David Jacobson said. “So, when you see it used or misused in our current world, you can more critically evaluate what a particular group is doing.”

Most Americans, as well as hate groups, have a glorified perception of classical cultures in that they believe antiquity is elevated and “high class” without an understanding or regard for the politically incorrect or unpleasant aspects, according to Curtis Dozier, who advocated for a more analytical lens when teaching or studying Latin.

“As students and teachers, we’ve got a great opportunity to take less of an idealized view and to have more knowledge and recognition of the history of how antiquity has been used,” Dozier said in his lecture over Zoom. “We should study antiquity with a critical eye and always be aware of the need not to indulge in uncritical admiration.”

Dozier’s website Pharos documents and responds to appropriations of Greco-Roman antiquity by white supremacist hate groups. He authors to claims that use antiquity to justify racism, homophobia, misogyny, anti-semitism or xenophobia.

“The Greco-Roman period had a lasting effect on how we view social justice today,” sophomore Syndey Mountain said. “It’s important to know the roots of a lot of the problems we face in society and how people still use ideas from the classics now.”

For the past four years, the Latin Lecture has focused on topics relating to themes of race, power and classical culture as Classics have largely been misconstrued with the European ideal that Greeks and Romans are white, when in reality they were Mediterannean, according to Jacobson.

“For those who study Latin or study Classics, there’s a very important element to keep the field removed from these ever growing white supremacist presences,” Jacobson said, “but these are presences that have actually been a part of the discipline for hundreds of years.”