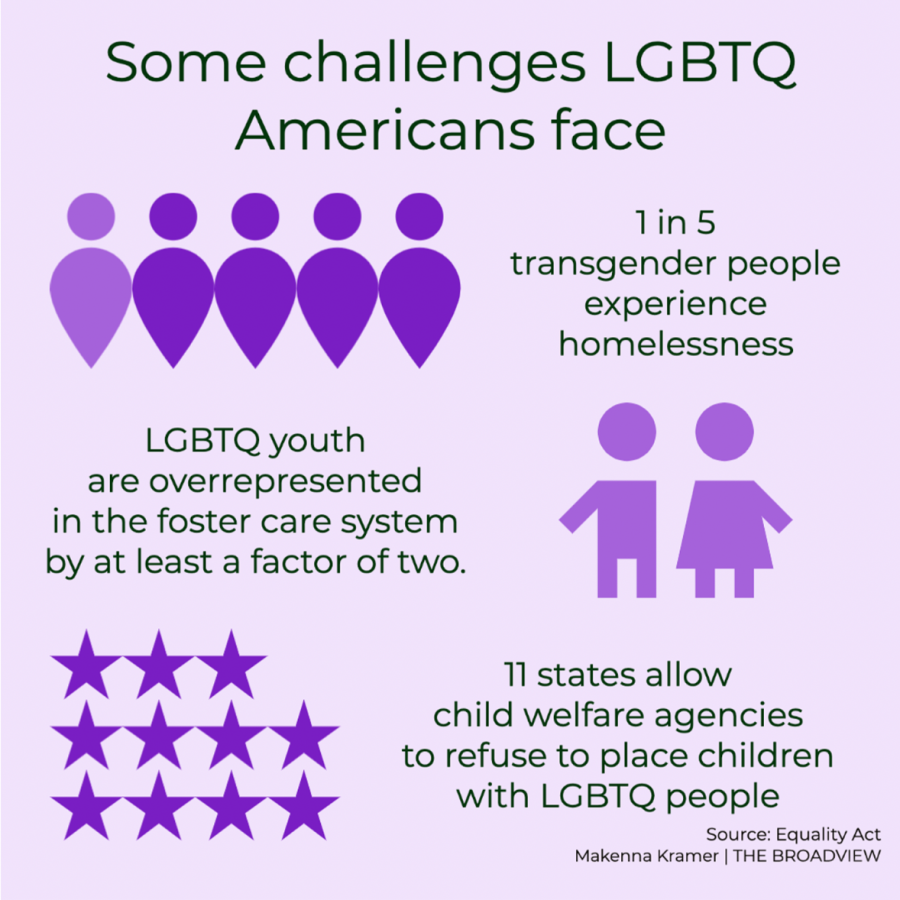 The U.S. House of Representatives passed the Equality Act on Thursday, a bill that would amend the Federal Civil Rights Act of 1964 to prohibit discrimination on the basis of gender identity and sexual orientation.

The act marks a new trend of LGBTQ protections under the Biden administration and Democratic-controlled legislature, following a Trump administration that limited LGBTQ rights by rolling back many Obama Era policies.

“Americans can finally celebrate this step forward in acceptance,” sophomore Audrey Roomian said. “Although I’ve never had to deal with being denied service for my sexuality, the Equality Act would mean people in my community no longer have to be afraid of this.”

LGBTQ Americans encounter prejudice in a variety of settings, including education. Twenty percent of LGBTQ respondents said they experienced personal discrimination while attending or applying for college, according to a 2017 study conducted by the Harvard School of Public Health.

“LGBTQ+ teens face a lack of support and validation at every level,” Sophia Pollak-Hurst, head of the school’s Gender-Sexuality Alliance, said. “There’s homophobic families and schools that don’t provide teens with the support they need, but also a lack of protection in law and society that forces them to struggle through everyday invalidation.”

In order to become law, the Equality Act must be approved by the U.S. Senate, a task that would require unanimous Democratic support and at least 10 Republican votes. Many GOP representatives have been advocating against the bill, claiming that it infringes on states’ rights and religious liberty.

“The Equality Act endangers the safety and well-being of our families,” Republican Rep. Andy Biggs of Arizona wrote in a press release. “It attacks religious freedom, freedom of expression and freedom of association.”

Despite pushback, many supporters of the bill say they are optimistic about its future, while some emphasize the need for more sweeping change.

“I don’t think anyone act will ensure equality for LGBTQ+ people, but this is a good start,” Pollak-Hurst said. “Legislation protecting LGBTQ+ rights is important because it not only supports those people, but it also validates identities in the eyes of the public and makes it harder for future administrations to take away those rights.”

President Joe Biden campaigned on a platform supporting LGBTQ rights, and more initiatives are expected, according to Reuters. In the meantime, many LGBTQ people are celebrating the Equality Act as a landmark civil rights bill.

“The Equality Act is exciting for the country,” Roomian said. “It wouldn’t be right to turn down service if someone was a different race from yourself, so why should it be that way for the person loves.”