Community reflects on racial injustice and privilege after presentation 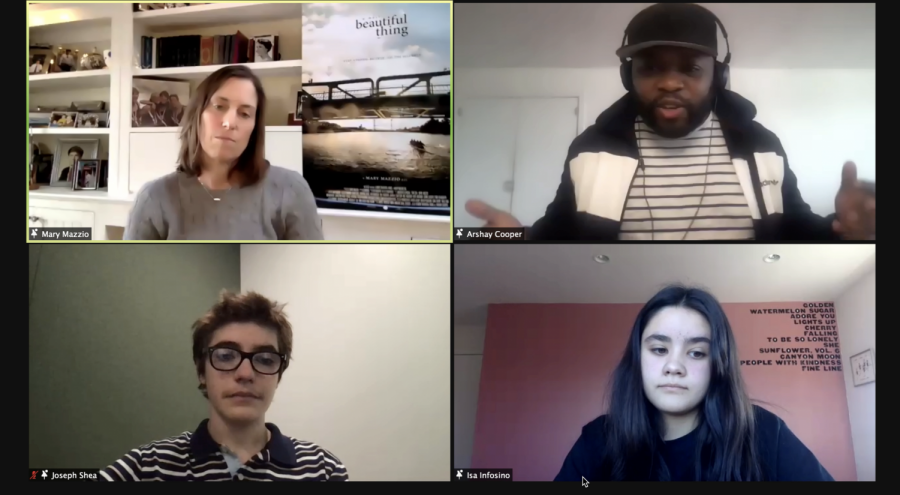 Junior Joseph Shea and sophomore Isa Infosino (bottom) interview documentarian MM and author AC during the Q&A session at the end of the virtual assembly on Feb. 24. “A Most Beautiful Thing” has been nominated for a Critics’ Choice Award, NAACP Image Award, and Best Documentary by the Foreign Press Association since the film’s debut in July of 2020.

WEB EXCLUSIVE Author Arshay Cooper and director Mary Mazzio visited the school community via Zoom on Feb. 24 to speak about their documentary, “A Most Beautiful Thing.” The film features the first Black American rowing team, made up of high schoolers from the west side of Chicago, and deals with themes of finding a community.

“We can do so much in our communities with our privilege, and seeing a different perspective opened my eyes and made me want to learn more about this,” freshman Brennan Damond said.

After hearing Cooper and Mazzio speak, students went to their Block 1 classes to reflect on what they heard and what they can do to help bring change to the systemic racism.

“Even though I’ve recently been learning more about the many instances of racial injustices that constantly occur in America, I realized how unaware I was of how many people, young people especially, are living in oppressed conditions,” senior Isabel Hoppman said. “It was especially powerful hearing the hardships Arshay and the people in the documentary had to overcome at such a young age.”

Mazzio spoke about the difference in privilege between her own and Cooper’s childhoods, and how unaware they each were of the others’ circumstances.

“Towards the middle of her speech, Mary Mazzio told a story about separation of girls eating lunch together in the cafeteria — the black and white girls stayed separate,” Damond said. “Mary realized that while she was only seeing one table of black girls eating together, the black girls were seeing hundreds of white girls eating together. I found that really interesting, her realizing ‘Wow, it’s just little things that separate us,’ and I think broadening our communities and the people around us could be beneficial for our exposure to others’ experiences.”

“Today’s session brought to light an issue I had never thought about, which is how marginalized communities don’t have the same access to mental health resources, despite the fact that they are dealing with enough trauma that it should be a necessity,” freshman Devan Dennis said.

Cooper shared two lessons he said carried with him from his rowing experience; leaving something better than how he found it and building bridges. Cooper says bridges need to be built one brick at a time, and that everyone needs to contribute their own brick.

“I think that he impacted me as a rower — I have a first hand experience of knowing how many white rowers there are — the sport does not excel in diversity,” Dennis said. “It’s really sad because rowing is such a fun sport and I wish that more people had the opportunity to do it, so it’s important to know his story and to know that there are others out there who are working to give everyone the opportunity to do it.”

Damond says it’s important to shed light on all racial issues, as they are not always prominently displayed in mainstream media.

“Especially this month, as it is Black History Month, and really all year-round, it’s important for our community to know about these stories and gives us an opportunity to open our eyes and learn about what is happening,” Damond said. “It helps us make a change about the systemic racism in our country.”