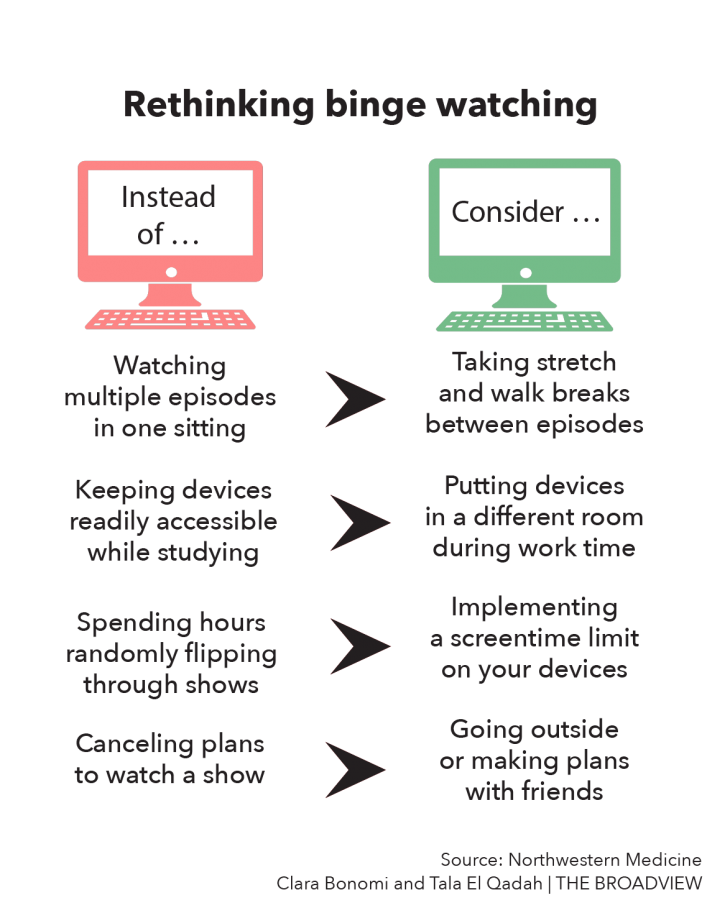 After arriving home from school, senior Madison Lerseth often finds herself binge watching TV shows for hours, prompting her to put off her homework and responsibilities until late at night.

“I usually spend about a couple hours watching shows on Netflix and Hulu on weekdays,” Lerseth said. “Sometimes I binge watch to the point where I have to cram on my homework, and it makes me exhausted the next day.”

Many teenagers find themselves hooked on their screens so much that they feel too drained to continue the rest of their day. U.S. teens spend an average of seven hours a day on their computers, tablets and phones, excluding screen time intended for schoolwork, according to CNN.

“After binging a show, I feel exhausted even though I haven’t done anything physically strenuous,” sophomore Samantha Calvin said. “It’s hard to motivate and get back to whatever I have to work on after that.”

Spending a large amount of time on screens can prevent watchers — especially teenagers — from focusing on beneficial mental and physical health habits like exercise, nutrition, sleep and self-care.

“If screen time is preventing someone from doing all that they want and need to do, then it’s a problem,” Dr. Mary Steele, who practices pediatrics said. “This could be an hour a day for some people or five hours a day for other people.”

Although binge watching can result in negative habits, it can help relieve stress and form connections with others through a mutual love of shows, according to junior Jennifer Surjadi.

“Whenever I feel overwhelmed and need an escape from reality, I watch my favorite show and it always helps me relax,” Surjadi said. “I like that I can talk to not only my friends, and people I don’t know about my favorite characters and scenes.”

But binge watching can also be a mental block, and Calvin has found the habit to be an obstacle when trying to accomplish schoolwork.

“I get distracted by watching shows when I should be doing homework,” Calvin said. “I have a lot of trouble focusing when my phone or computer is right there and I could just pick it up and watch something.”

Some students try to avoid giving into distraction by implementing screen-time limits on their devices with Apple Screen Time settings or third-party applications that can be applied to specific applications or the entire device.

Binge watching can cause adolescents to become antisocial and to choose to stay at home rather than to spend time with friends and loved ones, according to WebMD.

“When I start watching a really good show, I sometimes cancel plans and don’t hang with friends until I finish it,” Surjadi said. “It’s a really bad habit that I am trying to quit.”

Many teenagers, including Lerseth, have been noticing the results of binge watching and are trying to modify their habits.

“Binge watching has definitely had some negative effects on my mental health and productivity,” Lerseth said. “I want to get out of the habit of spending so much time on a screen and spend more time being social.”