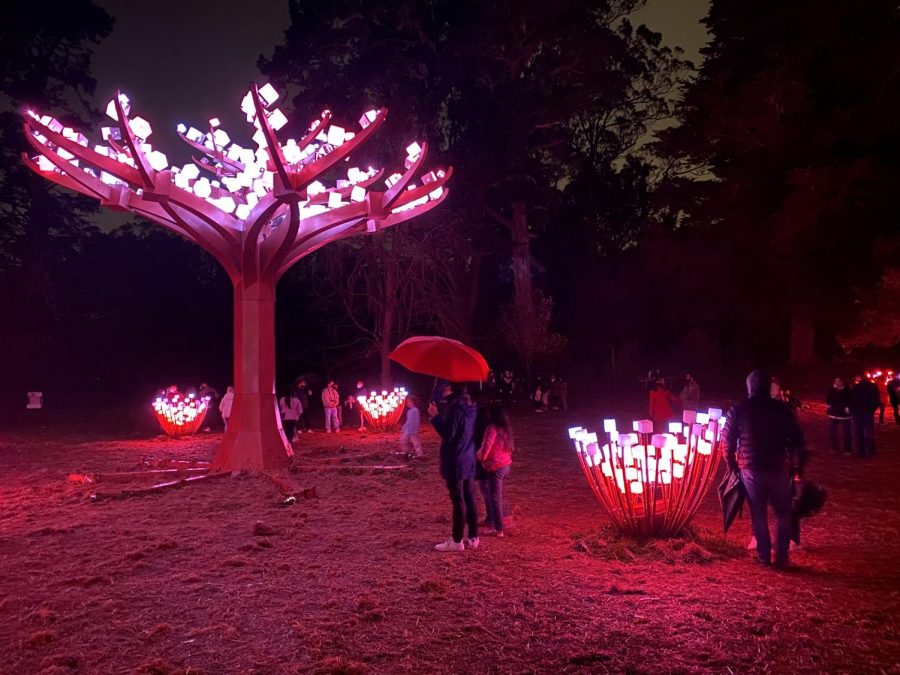 The Entwined lights turn on daily at dusk and turn off promptly at 8:30 p.m. The Peacock Meadow exhibit is part of the Golden Gate Park 150th Anniversary celebration and has free admission to all visitors.

With the statues’ array of colors, towering figure and whimsical setting, the new Golden Gate Park exhibit in Peacock Meadow, “Entwined,” has easily become one of the most unparalleled attractions the park has to offer.

San Francisco artist Charles Gadeken created the exhibit as a tribute to the 150th anniversary of Golden Gate Park. The installation opened in December and will host visitors through February with a possible extension to June 1.

“I definitely thought it was cool to visit,” junior Sara Ramelot said. “It was also nice that it was available to the public with free admission.”

The exhibition was supposed to be a holiday light experience that ran down John F. Kennedy Drive, but park administrators had to modify its plans in order to comply with public health and financial reasons, according to Lillian Archer, the Golden Gate Park 150th Anniversary Project Lead.

“Our idea was to bring a piece of public art to Golden Gate Park while maintaining social distancing and safety measures,” Archer said. “There are very few things that you can do safely and outdoors and this exhibit was meant to be something for people to look forward to.”

The exhibition comes to life at night with the trees that range from 12 to 20 feet tall and each sculpture’s flowering section is composed of 2,000 multicolored LED lights, according to San Francisco Recreation & Parks

“I like how it is set up so that you can see all the lights at night,” freshman Frida Cruz said. “It is nice to have something that everyone can go and see, especially during the pandemic.”

The exhibit is lit up daily from dusk to 8:30 p.m. daily with safety ambassadors stationed at the exhibit during peak operating hours to ensure social distancing. Some students, however, find the exhibit safety precautions lacking.

“It was pretty crowded when I went with my family,” senior Sofia Houts said. “Even though it was outside, there were more people than I would have wanted.”

Temporary installations celebrating the 150th anniversary of Golden Gate Park, including the SkyStar Ferris wheel, have been highly popular among tourists and locals, although the Ferris wheel was required to shut down as of Nov. 29

“I’ve always loved Golden Gate Park, so I feel like there is no reason not to visit,” sophomore Virginia Cross said. “That area is just so beautiful and nice to be around and these types of exhibits add something more fun to do while you’re in the area.”

The exhibition is adjacent to John F. Kennedy Drive, which has been closed off to automobile traffic since the beginning of the pandemic, allowing pedestrians and cyclists to roam along the road and view attractions like these at their leisure.

“It’s definitely worth visiting if you live in the City or happen to be nearby,” Ramelot said. “It’s also just nice that anyone can visit it as well.”