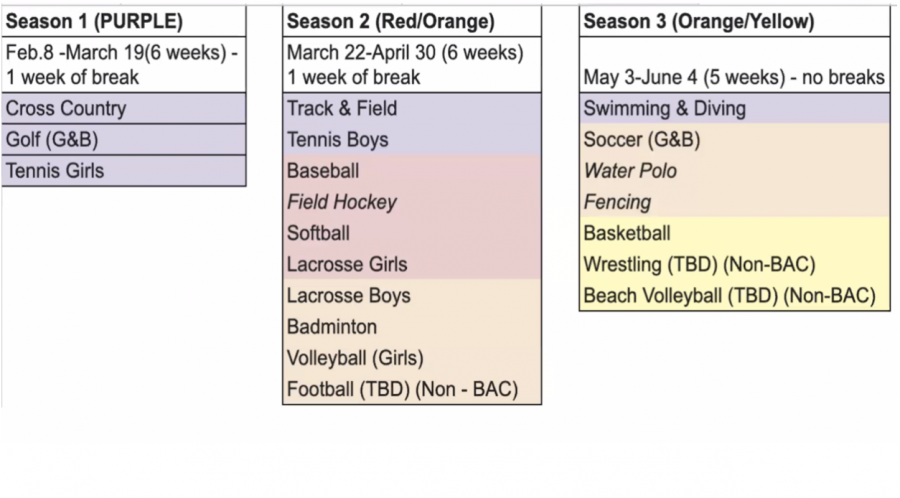 BCL-West’s modified three seasons allow for student athletes to participate in sports previously canceled due to COVID-19. The San Francisco Department of Public Health has not yet approved competitions between athletes.

WEB EXCLUSIVE Although the San Francisco Department of Public Health has not confirmed that athletes may compete against each other yet, cross-country, golf and girls tennis will start practicing for the first of BCL-West’s three, five to six-week long seasons.

“First and foremost, our biggest concern is the safety of our students and our coaches,” Dana Kuwahara, Head of Athletics and Physical Education, said. “We have a plan in place to get our teams back starting next week, but we’re still waiting on the San Francisco Department of Health to tell us what we’re allowed to do.”

Athletes who intend to play on any team must attend school in-person, may not play on any other school or club team, have an updated COVID-19 test, complete health forms and have pre-participation examinations.

Students like junior Sara Ramelot, who were previously attending classes online from home, are returning to school specifically to participate in their athletic season.

“Our golf team is very small so we all know each other very well and we get very close with each other throughout the season,” Ramelot said. “I’m looking forward to seeing if we have any new players.”

As of now, BCL-West has banned fans from attending matches, but the school is looking into livestreaming games and meets. Despite not having games with fans to support them, volleyball players, who have already begun modified practices, are keeping up their spirit by playing music and supporting each other, according to senior Aly Bannister.

“We’re still just as enthusiastic as we were before the pandemic,” Bannister said. “We just cheer ourselves on.”

The school is looking into providing student athletes with transportation to and from practice and games. Busses are currently limited to 14 so that passengers maintain a safe distance apart.

“The athletic directors in the City have met numerous times to find ways to keep students engaged,” Kuwuhara said. “It’s not perfect — we would like to offer more — but we are dealing with a public health crisis.”