Editorial: This is Trump’s America, and it is crumbling

Democracy threatened in heart of nation after violence ensues 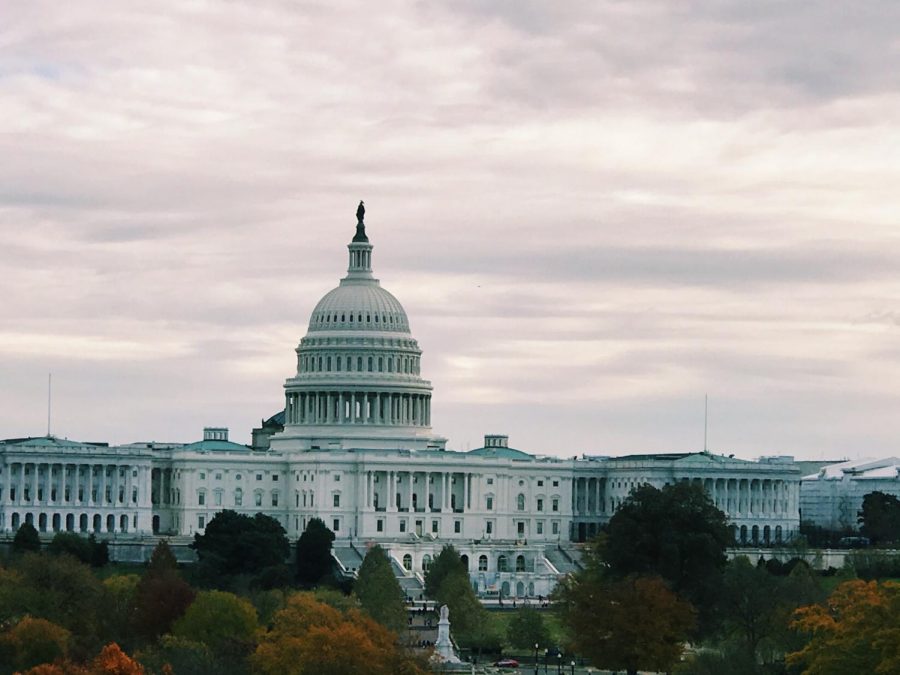 The United States Capitol in Washington, D.C. is viewed from the balcony of the former Newseum on the National Mall on Nov. 24, 2019. Insurrectionists broke into the Capitol during a Joint Session of Congress as Vice President Mike Pence received the Electoral College votes on Jan. 6, 2021.

WEB EXCLUSIVE Today was the most shocking day for the American people since Sept. 11, 2001 – our generation’s most striking equivalent so far. But instead of foreign terrorism threatening our country, it was our own citizens inciting fear as rioters stormed a building that stands for the most American of values: democracy itself.

After a chaotic 2020 and higher hopes for 2021, we watched the greatest threat to democracy in the history of our country unfold on television this afternoon. Americans – Democrats and Republicans alike – were united like never before against a rare common enemy: themselves.

Thousands of individuals who supported the president’s unsupported claims that he won the election in a “landslide” stormed the Capitol in an attempt to overturn the results of the 2020 Presidential Election.

During the storming, Vice President Pence was presiding over counting of the Electoral College votes certifying President-elect Joe Biden’s win. The House and Senate had just separated to debate the merits of counting the ballots from Arizona’s controversial election.

The First Amendment to the Constitution protects the right to peacefully assemble and protest. The violent storming of the Capitol Building was not protesting.

It was domestic terrorism.

President Trump using Twitter to incite the Capitol mob through words of encouragement is an attack on the American people and our democracy as he fuels the fire of hatred and divisiveness that politically polarizes our nation.

Trump’s message after rioters breached the building, shattered windows and vandalized much of the building – “We love you,” – only encouraged violence as protestors laden with Trump flags stood their ground on the stairs, deck and inside the halls of the Capitol.

In a similar fashion, stating that “there were good people on both sides” after the domestic 2017 terror attack in Charlottesville, Virginia, Trump declared his support for perpetrators. Instead of making a bold statement demanding for peace, he told supporters they were in the right and merely asked for respect towards armed forces and encouraged followers to go home.

The cloudy day looming over Washington set the scene of a dark Jan. 6, an unexpected yet tragic display of our broken democracy as video footage of rioters tearing down the American flag and replacing it with a Trump 2020 campaign flag flooded social media feeds.

We have never grimaced more at the sight of an American flag torn down and replaced – a reflection of its new position as the symbol of a broken nation. A possession so valued in its representation of honor and freedom that we do not allow it to touch the ground was paraded around carelessly in a senseless act of violence.

Aside from the largest public display of treason our nation has ever faced, the lack of immediate repercussions for the rioters that vandalized our Capitol was a grim reminder of our nation’s systemic roots in white supremacy.

With the reemergence of country-wide Black Lives Matter protests in June after George Floyd’s murder, armed National Guard members lined the Capitol stairs. The news today bore images of a single line of Capitol Police on the front steps of the building, with the National Guard being deployed by Pence long after initial violence. 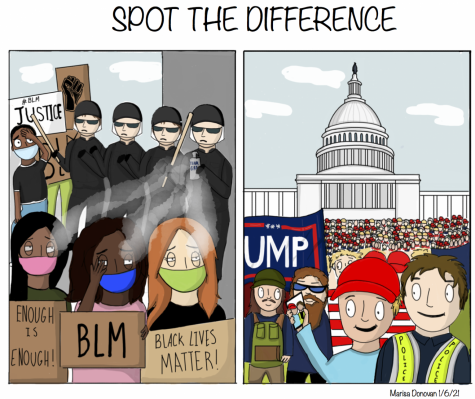 There are no two ways about it; if this was a protest of people of color, there would be an overpowering active law enforcement presence, increased fatalities and outrage from citizens across the country.

When there was a small number of rioters in proportion to the hundreds of thousands of peaceful protesters during the Black Lives Matter protests in June, the president labeled the entire organization as “criminals.”

When a large group of people bearing Confederate and navy blue “TRUMP 2020” flags committed treason, Trump empathized with them and reiterated his support for their frustration.

As we watch videos of police officers helping rioters gently down the Capitol stairs, we cannot help but be reminded of the videos of unarmed people of color who were tear gassed, shoved to the ground and even shot, as they marched for racial equality in support of the Black Lives Matter movement.

The questions arise: Why aren’t people being arrested? What happens now? How can the country safely have an inauguration?

“The words of a president matter,” Biden said, when addressing the panicking country – and much of the world – at 5:50 p.m. EST. The president-elect was the first to address the conflict, and spoke directly to all the American people, contrasting Trump’s one-minute speech on Twitter that was only directed towards his followers.

Biden’s calming tone in his address seemed comforting to us, only because we as United States citizens have been conditioned over the past four years to expect contrasting behavior.

As Inauguration Day approaches, Biden spoke of restoring decency and respect – a value that has most certainly been abandoned by the Trump administration.

The President-elect reassured that these constant, overwhelming events would end if we could once again unite in a decreasingly divided environment.

Almost like an angry parent scolding their child, Biden shook his condemning finger at Trump: “Enough is enough is enough.” His warning that “these are images that go to our children” hit close to home as we watched the television, glancing up from our Zoom classes on our computers to witness violence that ensued at the steps of the building that symbolizes peace and civil cooperation.

Republicans such as Wisconsin Congressman Mike Gallagher, who stood by Trump through scandals and impeachment have suddenly turned on him, calling for his resignation while characterizing his actions with words as simple as “cowardice.” This list includes his own vice president, who effectively distanced himself from the president over the last few days by acknowledging the outcome of the 2020 election will no longer be in Trump’s favor.

The National Association of Manufacturers — a conservative-leaning organization — called on Pence to begin the process of invoking the 25th Amendment, through which he would immediately take over the role of president until Inauguration Day. This would be a bold decision made in order to declare a strong message that the jeopardy of our capital is not acceptable.

Although the entire nation is divided on Trump’s current presidential capability, his words have the influence that only a president’s can.

While the president made brief remarks from the White House Rose Garden posted on his Twitter feed, his speech was incomplete without starting and ending with repeated accusations of his stolen election – further enabling the mob rioting in the Capitol Building.

As night falls on the Washington D.C. skyline, fears of nighttime violence grow as grim reminders of BLM protests haunt the American people, despite a 6 p.m. to 6 a.m. curfew imposed on Washingtonians by Mayor Muriel Bowser. Her stern warnings to “stay at home,” for once in almost a year, had nothing to do with the ongoing coronavirus pandemic.

Americans need civil leadership, now more than ever before. It is time to stop the bipartisan disputes surrounding Trump’s vain refusal to concede and focus instead on the peaceful transition of power as we prepare for the Biden-Harris administration and anticipate Inauguration Day on Jan. 20.

As our elected leaders reclaim the Senate Floor — once security cleared the premises — to proceed with certifying election results, we must set aside our partisan views to focus on working together for the common good of our country.

Our democracy depends on it.