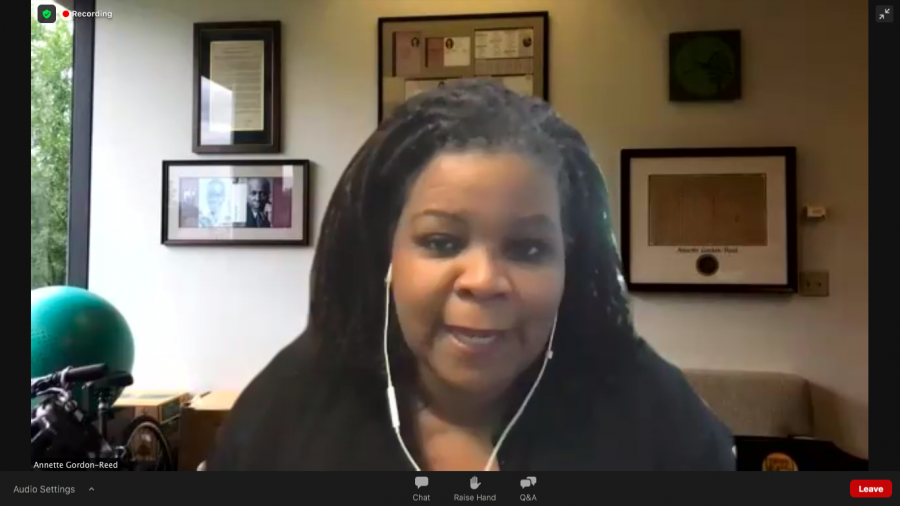 National Book Award winner author Annette Gordon-Reed speaks to students about the history of Thomas Jefferson and slavery and how this narrative transcends into the present. Students met in smaller discussion groups after listening to the webinar to discuss various aspects of history’s legacy.

“Institutionally, we feel that Professor Gordon-Reed’s work and the dialogue discussions are an entry point to uncovering issues in history that are still alive and present,” Alyson Barrett, Library Department Academic Chair said. “Hearing these issues broken down from an academic perspective really helps when we enter into difficult and necessary conversations like this.”

The day began with an oral presentation by Gordon-Reed followed by student questions. Students then joined dialogue discussion groups that explored some of the central themes of Reed’s work, including race relations, the effects of Jefferson’s political beliefs, and understanding America’s history with slavery.

“A lot of Jefferson’s political philosophy flowed from his assumption that all people were good, but now we look at that and see tremendous naivete on his part for not being realistic enough,” Gordon-Reed said in the webinar. “From this, he believed slavery was going to die out, not undertsanding what really happened.”

Gordon-Reed, a Professor of History at Harvard University and the Charles Warren Professor of American Legal History at Harvard Law School, has written six award winning books. Her analysis of important historical figures such as the Hemings family of Monticello, Thomas Jefferson, and Andrew Johnson explore race relations in Colonial America and its connection to the present day.

“I really enjoyed hearing from Professor Gordon-Reed because I didn’t know much about Sally Hemings and her relationship with Thomas Jefferson,” junior Sara Ramelot said. “The dialogues were also thought-provoking because they allowed us to talk about issues that we don’t always have a chance to explore during class.”

Gordon-Reed discussed her most recent work, “Most Blessed of the Patriarchs’: Thomas Jefferson and the Empire of the Imagination,” co-authored by historian Peter S. Onuf. Gordon-Reed described the writing process alongside another historian and the application of her book in the modern world.

“Jefferson’s first memory was of being handed up on a pillow to an enslaved person so slavery really bounded his life from the beginning to the very end,” Gordon-Reed said. “We made an effort to put together the puzzle of the portrait of Thomas Jefferson who was this really extraordinary individual and I hope others can pick up and continue from our contribution.”

Students met in discussion groups facilitated by faculty members to talk about a specific area of history and how it connects to the modern world. The dialogues ranged from discussing monuments and controversial historical figures to the case for reparations.

“We hoped the full day of enrichment would provide a way to deepen topics related to her talk and some of the challenges we as a society are facing today,” Barrett said. “She’s such a powerful voice for the way history is alive in the current social issues we are all trying to deconstruct and analyze.”