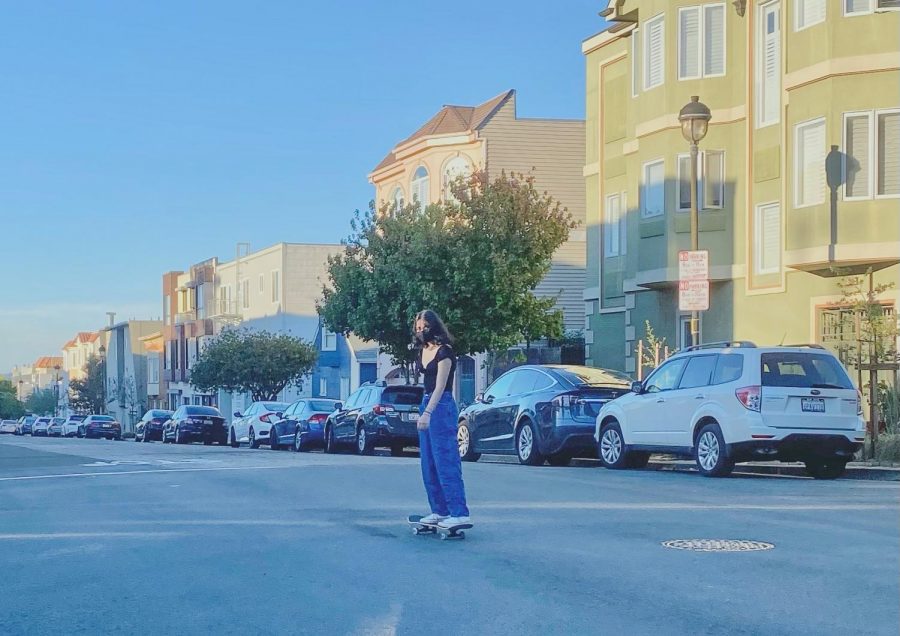 Sophomore Azadeh Reiskin often skates in Forest Hill after school to get some fresh air and exercise. Some skaters gravitate towards skate parks, but for many of them, skating in residential areas also proves to be more appealing and lowkey.

With trend-setting fashion, a tight-knit community and a unique demographic, skateboarding has become a staple on San Francisco’s streets.

The sport has recently become a trend among social media influencers, including The Ride Channel on Youtube and Luan Olivera on Instagram. It can relieve stress, according to sophomore Sinead Trevino.

“I like how freeing skateboarding is and how it allows me to get active and outside,” Trevino said. “It lets me catch a break from the stress of schoolwork and assignments.”

Sophomore Azadeh Reiskin escapes from spending time on her computer due to virtual learning by skateboarding in her neighborhood.

“I think we’ve all spent a lot of time online lately,” Reiskin said. “I took up skateboarding recently, and I think it’s just fun and relaxing to have something that lets me get some fresh air after sitting at my desk all day.”

Skaters use locations all around San Francisco, including parks specifically designated for skating and wide open areas with few people, for practicing and learning tricks.

“I skate a lot in Golden Gate Park,” junior Shana Ong said. “I think that it’s such a popular thing now that I’ve seen people skating anywhere where there’s space.”

Skaters also take advantage of the diverse landscape of Nob and Russian Hills, Golden Gate Park and the Presidio. Skateboarders should frequent areas that they find appealing, according to Matt Derrick, an employee at Deluxe Skateshop in the Lower Haight. DLX is one of Yelp’s highest-rated skate shops in the City.

“Traditionally we think about going to skate at a lot of very famous spots like the Embarcadero area or Justin Herman Plaza down by the Ferry Building,” Derrick said. “It’s more about just exploring and seeing where the City takes you.”

Although skateparks are plentiful in San Francisco, it is just as easy to walk out the door and skate down the block, according to junior Bridget Mills.

“Some of the big skate parks in San Francisco are SOMA West Skatepark and Balboa Skate Park, but I’d rather just skate around my neighborhood,” Mills said. “It’s less crowded, much more relaxed and allows me to do whatever I want.”

Skating fashion includes down jackets, flannels and cargo pants as well as customized boards, which can both be a large part of the way that skaters express themselves.

“Popular styles and trendy brands are Dickies, beanies, mom jeans and Vans,” Trevino said. “Those are the essentials in terms of fashion, but a lot of skaters also personalize their boards with stickers, paint or colored wheels.”

Despite its popularity, skateboarding remains a largely male-dominated sport, especially among younger skaters.

“I don’t know a lot of girls who skate,” Mills said. “It’s definitely more popular among guys in San Francisco, but I hope that I can find girls that I can skate with because it’s something that I want to share with other people.”

A well-fit helmet and wrist, knee and elbow guards are essential for a safe skateboarding experience, according to Teens Health.

“Taking precautions while skating is really important, especially in a city like San Francisco where drivers and pedestrians can be unpredictable,” Trevino said. “All in all, the skateboarding culture is definitely a bit exclusive at times, but I think that it still supports everyone, especially when it comes to beginners.”