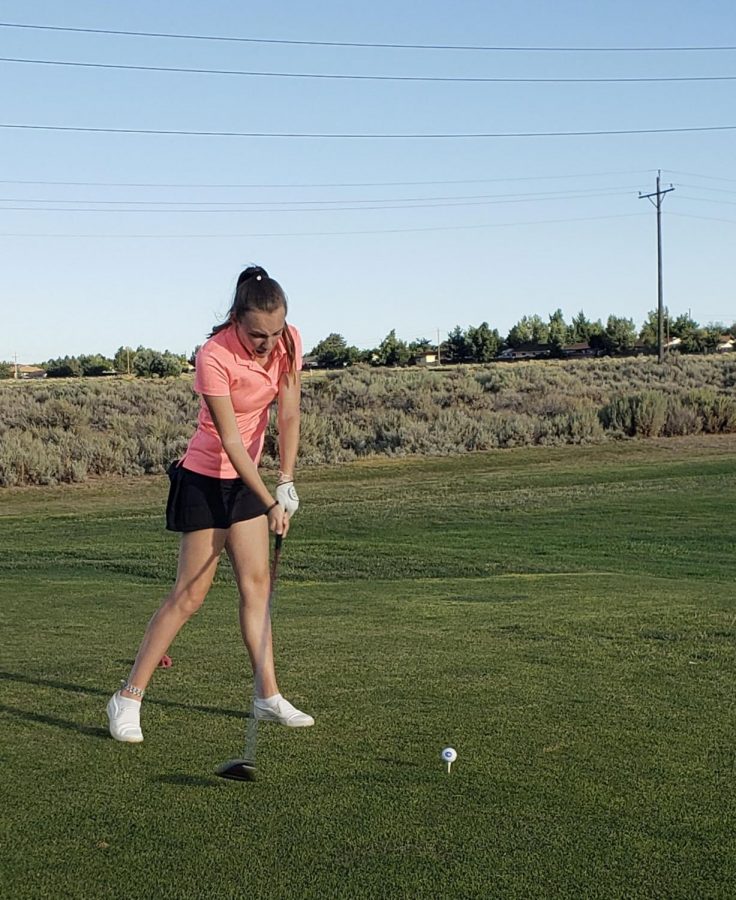 Junior Sara Ramelot participates in her independent sport during quarantine. Ramelot has continually played golf at the Presidio Golf Course and the Menlo Country Club.

Although many sports have been put on hold due to COVID-19, independent sports such as golf, tennis, horseback riding and kung fu are still practicing, but with new safety precautions.

“We are still competing at local shows and riding three to four times a week,” senior Hallie Williams said. “There are certain regulations, for instance there are only two people allowed per lesson, and we cannot stay at the barn for more than two hours.”

Junior Sara Ramelot also rides but at a different stable and she participates in other independent sports such as golf on courses that have altered their set-up.

“Everyone has to drive their own golf cart,” Ramelot said. “The holes also have a little sponge-like thing around them, so that the ball can’t go all the way down so you don’t actually have to touch the flagpole to kick the ball out of the hole.”

While some independent sports are practicing and competing, not all have come back. Senior Erandi Arciga-Duenas is currently unable to practice karate even with COVID-19 precautions.

“I’ve been doing karate since I was six,” Arciga-Duenas said. “I’m really upset that my dojo was forced to close because we were in the middle of planning for an annual belt promotion ceremony which was forced to be canceled.”

Arciga-Duenas is also an instructor at her local dojo where she teaches students ages 5 years to 18 and older in fighting and weapons, and self defense using the Kama, nunchuck and tonfa.

“We do plan to open back up when schools are as well,” Arciga-Duenas said. “We will set new guidelines regarding small class sizes, social distancing, temperature checks and washing hands.”

Tennis, even though it is played as a team sport on campus, is practicing. With new public health restrictions including players having their own tennis balls and reserving courts, the new regulations make tennis harder to practice, according to senior Linda Karti.

“I’ve been playing since the beginning of quarantine with friends and family,” Karti said. “Although I’m still able to practice it, the rules are a bit confusing and I’m not used to having separate balls and worrying who will pick it up.”

As of now, California Interscholastic Federation and North Coast Section has mandated for sports to begin in December when all sports will be broken up between two seasons. Independent sports such as girls golf and tennis will begin in the first season.

“It is definitely easier to do golf and horseback riding,” Ramelot said. “I’m very grateful that I’m able to do two independent sports that are less affected than other sports.”