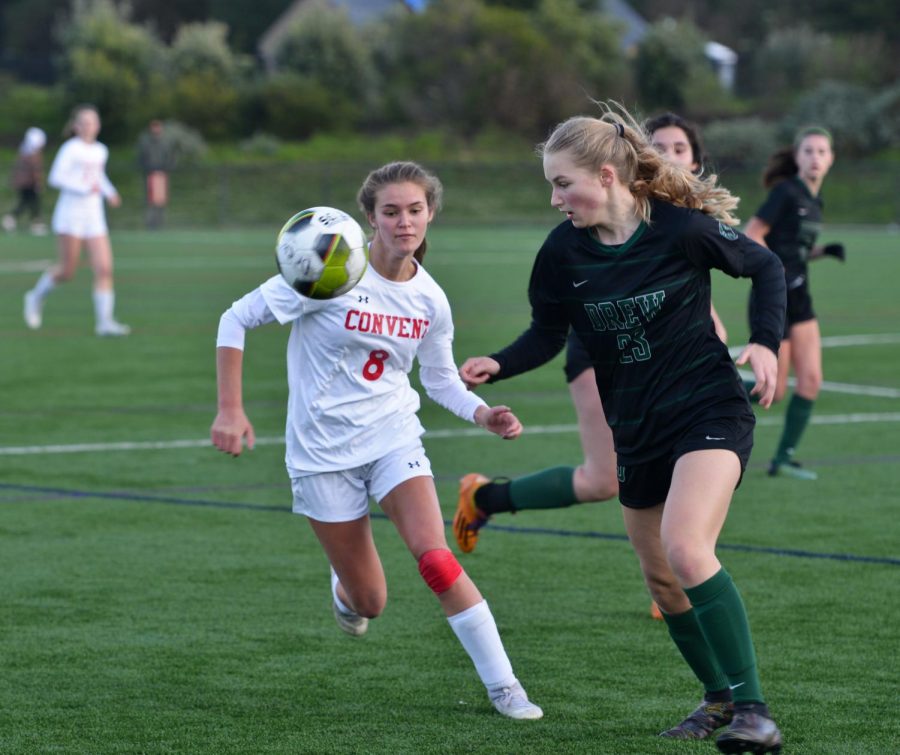 Former Convent student Cassia McTamaney steps to the ball in a playoff game last season against Drew School. After being on the Convent varsity soccer team for two years, McTamaney transferred to the IMG Academy, an elite sports education institution.

“I think the difference in pay can hurt the mindset of girls deeply because their peers of the opposite sex have a greater opportunity than they do which could make them feel as though they are not as important,” senior Sofia Jorgenson said. “This tells girls from an early age that males are dominant and are valued more.”

For many, positions on professional sports teams can be a childhood dream. For some girls, the pay gap mixed with the lack of guaranteed success ends their professional hopes early according to Director of Operations at SF Elite Academy Abby Kalscheur.

“I’ve seen girls consistently be more pragmatic in the approach to their sports future than young boys. As a consequence, rather than pushing through a performance plateau, girls quit the sport in droves at key school grades, usually when entering 6th grade and 9th grade,” Kalscheur said. “ Through my 15 years of coaching, a rough 30%-50% estimate of the number of girls that dropped soccer did so because ‘they couldn’t see a future’ for themselves.”

A recurring theme of sports in the United States is the specification of “Women” in league names. The National Basketball Association is the male league while the women’s league adds on the female specification.
Culturally, the MLS is much more prevalent than the NWSL according to Executive Director of San Francisco Vikings Club Jovan Yamagishi.

“Visibility — we hear so much about MLS teams, yet we hear very little about NWSL teams,” Yamagishi said. “Oftentimes you will get asked by someone that doesn’t know the game very well, ‘What is NWSL?’ or ‘What does that stand for?’”

The MLS averaged 21,000 fans attending each game, while the NWSL earned 6,000 fans at each game in the 2018 season.The MLS also has 21 major sponsors compared to the four of the NWSL.

“I think the salary disparity is a reflection of the lower viewership, and lower funding/investors pulling for the women’s game,” Kalscheur said. “For the most part, money speaks, and the NWSL has not found a
viable way to differentiate themselves as a sport enough to earn higher salaries yet.”

The NWSL was established in 2012 after two past attempts at professional soccer leagues for women folded. Women’s Professional Soccer and the Women’s United Soccer Association tried to take off in the early 2000s, but were unable to continue.

“I think the fact that there is nothing stating that men and women need to be paid equally in the same sport says a lot about women’s rights,” Jorgenson said. “There is this recurring theme within society that pushes
women down and basically tells them that they don’t deserve as much and they are not
equal.”