As candidates race to 270, some question Electoral College 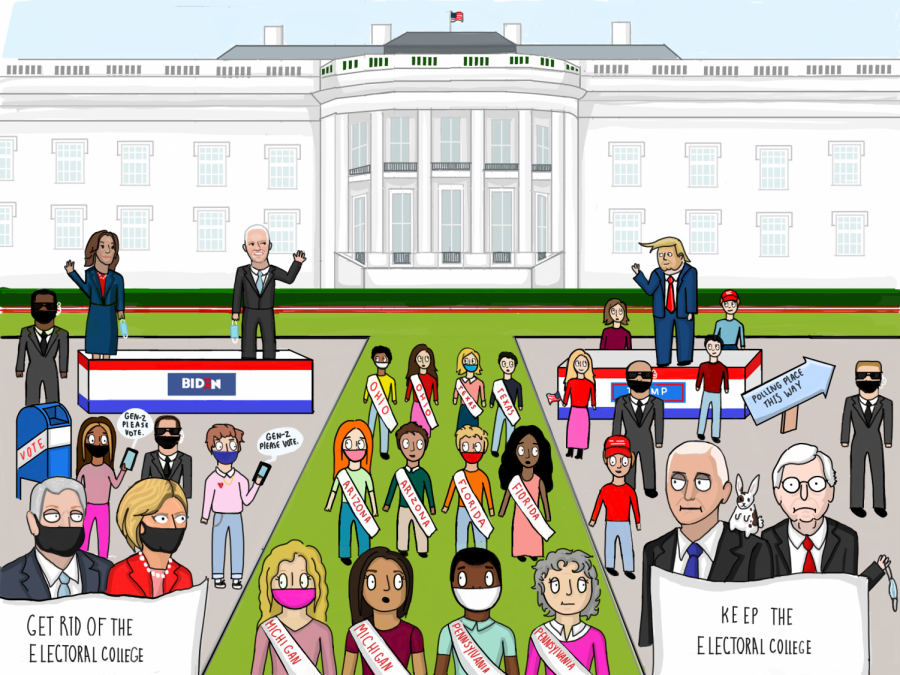 With a new election season, the road to the White House becomes increasingly confusing for youth attempting to navigate this complex year. Cartoon by Art Editor Marisa Donovan.

In the five instances in United States history in which the candidate who won the presidency gained the majority of electoral votes needed to win despite failing to gain the majority of the popular vote, two took place the last 20 years, sparking debate over whether or not the Electoral College is an accurate representation of the people’s voice.

“Donald Trump won the number of electoral votes needed to win in 2016, but he was not backed by the majority of the American people with the popular vote,” senior Halsey Williamson said. “Growing up in a liberal family in South Carolina, it felt discouraging during election cycles since our votes for Democratic candidates were not of much significance as the Republican majority took all the electors for our state.”

The Electoral College currently consists of 538 votes, divided among all 50 states and the District of Columbia, and are based upon each state’s two senators and the number of representatives each state has in the House, according to Article II, Section I, Clause II of the U.S. Constitution. Even though the District of Columbia is not a state, it is still granted three electoral votes, which is the same number as the least populous states.

With just under six weeks until the presidential election, many newly eligible and of-age voters are dipping their toes into the world of politics for the very first time as they register to vote and familiarize themselves with the election process.

“Every political system, including the American political system, can be very confusing and while it may feel overwhelming, that is part of it,” global politics teacher Angelica Allen said. “Sometimes people use the more confusing aspects of the political system to convince people out of using their vote, and this tends to happen a lot with young people.”

Critics of the Electoral College argue that the system causes presidential candidates to only campaign to a select handful of residents in “swing states” — states where the electoral votes could typically fall on either side of the aisle — rather than allocating the time and resources to campaign to the whole country.

“The reason why National Popular Vote is gaining momentum because the American people are getting tired of a system where candidates for the presidency are only focusing on a handful of battleground states in their campaigns,” Patrick Rosenstiel, Senior Counselor of the National Popular Vote campaign, said. “A vast majority of the American people believe we should have a system where every voter in every state is politically relevant in every presidential election.”

The National Popular Vote Interstate Compact is an agreement among states to ensure every vote matters by granting the majority of electoral votes to the candidate who gains the majority of the popular vote without having to alter the Constitution. In order for the NPV Interstate Compact to go into effect nationwide, it must be enacted by states with at least 270 out of the 538 available electoral votes.

“Those in favor of the Electoral College argue that it actually protects smaller states to some extent because every electoral vote matters, especially in really close elections,” Allen said. “New York, Texas and Florida have 96 electoral votes combined, and the criticism of that is that it is not entirely representative of all American people and political campaign strategies become more like a math problem than focusing on who and what American is at any given time.”

The current presidential election system allows each citizen’s vote to only influence a handful of electors within the state they represent. By enacting National Popular Vote, each person’s vote would influence the distribution of all the electoral votes.

“Four out of five Americans are relegated to a mere spectator status in presidential elections and it affects them in a negative way,” Rosenstiel said. “It is not just in terms of the campaigns focusing their attention on them because it ignores the concerns of issues that are important to the majority of Americans as attention is hyperfocused on the concerns of one out of five voters.”

Regardless of whether or not one lives in a battleground state, it is still important to exercise the right to vote and participate in democracy, according to Williamson.

“A popular vote system would boost a lot of American’s confidence in our election system because they would feel that their vote matters,” Williamson said. “We would be able to avoid what happened in 2016 when the second-place candidate in terms of the popular vote ended up winning the presidency.”