Ash and smoke cast an orange blanket over the City 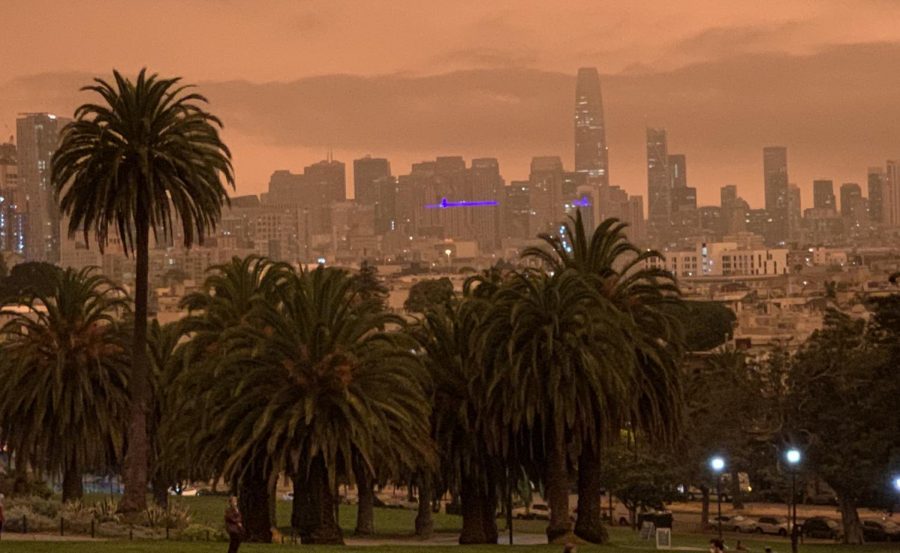 Makenna Kramer/Special to The Broadview

An orange haze resting over downtown San Francisco is visible from Dolores Park on the morning of Sept. 9. Despite the smoky skies, air quality was considered moderate across most of the City according to the Environmental Protection Agency.

WEB EXCLUSIVE A haze fell across San Francisco this morning, creating confusion among students about the effect on their school routine.

Winds blowing into the Bay Area brought smoke from the rapidly growing Bear Fire near Chico, California, resulting in a red-orange hue. Junior Jennifer Surjadi says she woke up disoriented due to the layer of ash caused by the fires.

“I was very confused because I thought it was the middle of the night,” Surjadi said, “but when I checked my alarm, I had 10 minutes until class.”

Not only did the ash in the sky cause disruption, it also called attention to the deeper issue of the severity of the fires. Science teacher Sara Petty said that rising temperatures have not helped reduce the number of fires in Northern California.

“Trying to control natural wildfires has caused a significant amount of problems in California,” Petty said. “Not allowing the natural fires to burn in decades combined with longer heat waves both lead to more widespread wildfires that produce this type of particle we are seeing today.”

The lack of sunlight this morning was an ominous and eerie way for many students to start off their school day. For sophomore Makenna Kramer, the unusual sky impacted her normal morning routine.

“Without the sun to wake me up, I got out of bed super confused and almost missed the start of my class,” Kramer said. “I didn’t even have time to walk my dog like I normally do.”

The layer of ash is raising questions about how the smoke may affect the environment. Science teacher Allison Lovejoy is uneasy about the long term effects on the environment.

“My biggest concern is how long this will last, and also what kind of effects this will have on photosynthesis and agriculture,” Lovejoy said.

Although this ashy haze has hung over the city for only a day, it raises awareness surrounding the recent NorCal fires. Approximately 2.9 million acres burned in San Mateo, Santa Cruz, Napa, Mendocino, and Sonoma.

“Hopefully all the ash in the sky will clear out in a day or two,” Surjadi said. “It definitely disrupted my daily routine but at least now I’m more aware of how severe the fires are.”