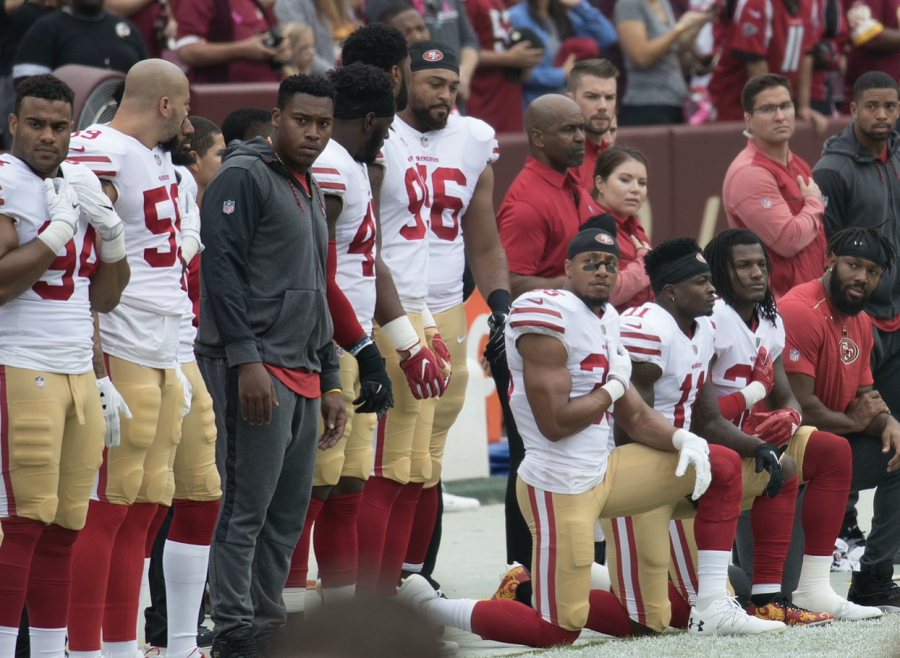 San Francisco 49ers players kneel during the national anthem to protest police brutality and racial injustice at a game in 2017. This was one form of protest in sports used three years ago that members of certain teams, such as the San Francisco Giants, employ today.

One basketball team, the Milwaukee Bucks, decided not to attend a playoff game against the Orlando Magic on Wednesday night following the shooting of Jacob Blake. Blake was shot several times in the back by Kenosha police on Aug. 23.

“I think [the protest] really highlights how unity in protesting for civil struggles can be such an important thing,” sophomore Ella Runneboom said. “It’s important for people to speak out about these issues, especially if they have a platform.”

Buck players Sterling Brown and George Hill, read a statement at a press conference following the protest at AdventHealth Arena. The team announced they would not be playing the fifth game of their postseason.

“Over the last few days in our home state of Wisconsin, we’ve seen the horrendous video of Jacob Blake being shot in the back seven times by a police officer in Kenosha, and the additional shooting of protestors,” Brown said at the press conference. “Despite the overwhelming plea for change, there has been no action, so our focus today cannot be on basketball.”

“Some people don’t believe racism is prevalent in our community,” sophomore Isa Infosino said. “The fact that these athletes who have a big platform are canceling games in protest, is hopefully showing people how much racial injustice we have in this country.”

The protest was meant to raise awareness surrounding police brutality and racial injustice. The team noted that basketball can happen at any time, but bringing light to serious situations has to happen in the moment.

“When we take the court and represent Milwaukee and Wisconsin, we are expected to play at a high level, give maximum effort and hold each other accountable,” Hill said at the press conference. “We hold ourselves to that standard, and in this moment, we are demanding the same from our lawmakers and law enforcement.”

Before the shooting, Buck’s players supported the Black Lives Matter Movement by kneeling during the national anthem. The team also wore shirts labelled “Black Lives Matter” to show their solidarity.

“It is important for players to use their platforms to promote the urgent need for change,” Runneboom said. “Even though there’s people contributing to change, the more people who participate in the change the better the end result will be.”