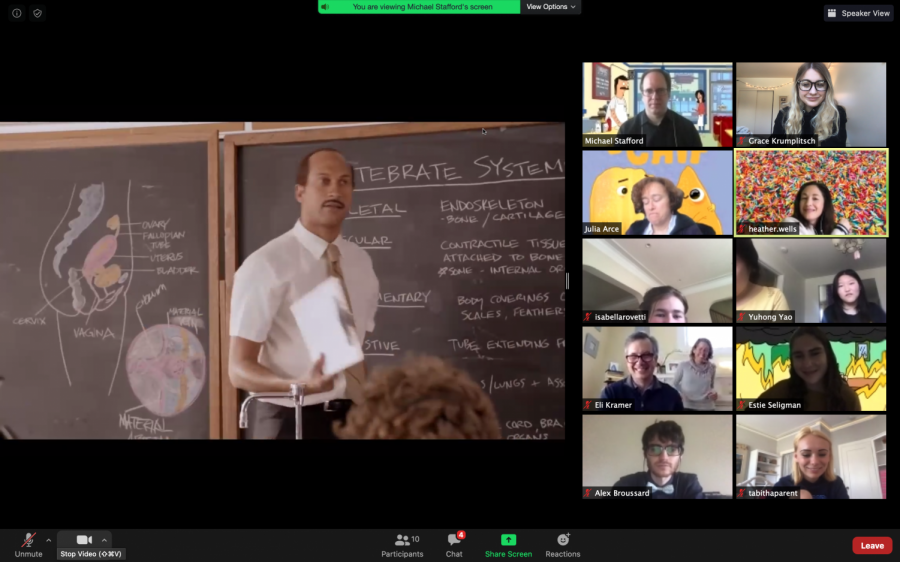 Participants in English teacher Julia Arce and history teacher Michaels Stafford’s joke-themed Zoom room watch a Key & Peele skit about a substitute teacher during the school's virtual Congé on May 20. The room was a platform for lighthearted humor and puns to relax before upcoming final exams.

WEB EXCLUSIVE The school community joined the poetry festival webinar and ended up receiving the news that today was Congé and classes for the day were canceled.

“I was so surprised that Congé was today since there were no prior indications or clues that it might be,” freshman Julia Kearney said. “I joined the Netflix Party to watch ‘The Office,’ and it was fun to watch with my friends and classmates.”

Congé was from 10:30 a.m. to noon. A website listed  various activities students could pick from such as joining a Netflix Party, working out with Coach Barclay, or cooking with the head of the Breakfast Club.

“There were so many options that I did not know what to choose,” sophomore Haya Jadallah said. “I ended up playing Animal Crossing with my friends and it was so fun.”

“Maxi and I were a little nervous about the logistics of breaking the news,” Nassiri said. “The positive feedback the Student Council has been receiving is reassuring that our unconventional Congé was a success.”

For each activity listed on the website, there was a Zoom room to interact with students and faculty about the shows that were streamed, cooking, or video games.

“I got bored of playing Animal Crossing after a while,” Jadallah said. “So, I switched rooms and watched The Office for a little bit.” Jadallah said.

The flexibility of the Zoom rooms allowed for everyone to switch rooms and activities as they wished and provided an opportunity to try new activities and watch new shows.

“Overall, I really enjoyed having a day where I can relax and engage with our Sacred Heart community virtually,” Kearney said. “It was nice to have a break with all the stress about the upcoming finals.”