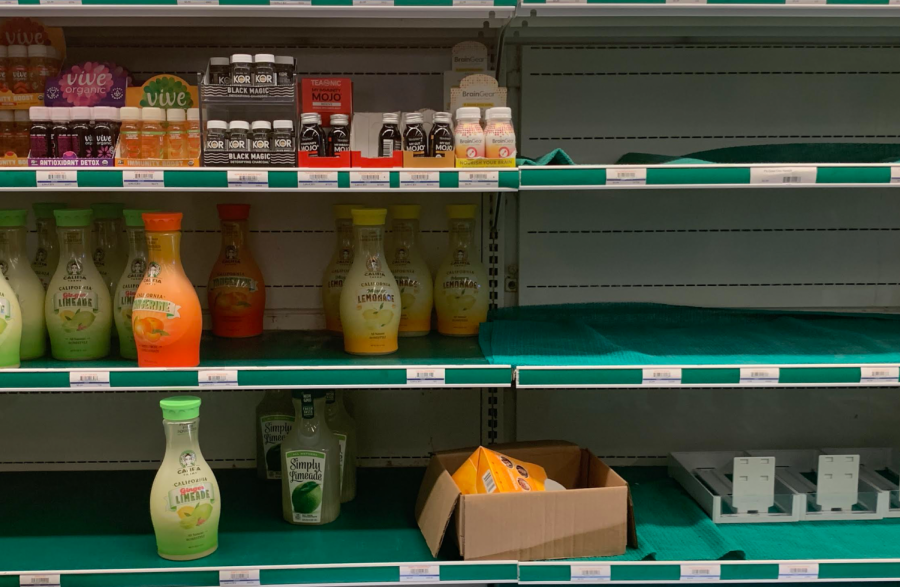 While items like pasta and bread are flying off the shelves of Bryan's market in Laurel Village, juice cartons and juice shots are much less popular. Shoppers are continuing to sweep assorted items off of grocery store shelves in response to the San Francisco Department of Public Health's mandated shelter in place.

WEB EXCLUSIVE A few weeks ago, when talk that schools were beginning to close down became prevalent, I started an internal chant of No school, no school, no school and let it play on repeat in my head. But, after visiting a grocery store for the first time since school closed, I wished that I had had a fairy godmother all those weeks ago to tell me “Be careful what you wish for.”

My dad is in the restaurant business, so I’ve spent the last few days watching him and his team adjust to new restrictions and regulations that the city is imposing on places of business. When Mayor London Breed announced the city’s plan for a shelter in place policy effective midnight Tuesday, I went around with him to put up signs in the windows of his restaurants to let people know they were still open for take-out and delivery, and to talk to some of the employees at each location.

While restaurants (excluding take-out and delivery options) have been deemed non-essential by the San Francisco’s Department of Public Health, grocery stores are an obvious must. But weathering them now requires putting on one’s bravery hat.

After putting up the signs with my dad, we took a little pit stop in Laurel Village to get some dinner items— but if I’m being honest, here I just wanted to experience firsthand the horror stories that I had been hearing about the barren wastelands known as grocery stores.  Cal-Mart was closed. They’ve recently adjusted their policies to limit the amount of disease trafficking going through their store, apparently. We went to Bryan’s instead.

I’m a San Francisco kid, born and being raised. We don’t get blizzards or hurricane season. The one time I remember getting off school for the weather was in 2014 when they shut down schools because it rained for a day. There wasn’t even any lightning. So since I’m a San Francisco kid, I’m left to imagine what stocking up in preparation for a big snow storm or days on end of no electricity would look like. What I typically imagine doesn’t even come close to preparing me for the chaos that was a grocery store in the midst of a pandemic.

Compared to my dad’s restaurants —which were virtually deserted, the grocery store was like a TSA line the weekend before Christmas. It was hard to tell which way was left and which way was right because there were no longer any products to distinguish one aisle from the next; the shelves were approaching empty.

People were crowding the aisles, talking on their phones with their partners, debating whether it was worth it to buy a knock-off version of their favorite brand of almond milk, or to endure a few weeks without Califia Farms™ Coconut Almond Milk, which is obviously superior in every way.

I also learned that of things that San Franciscans place high on their list of essential items, fruit juices and fresh fruits and vegetables do not rank very impressively. For California, a state seemingly obsessed with juice cleanses and healthy eating, this is a very comic situation. Carbohydrates, however, do rank pretty high on most people’s lists. This makes sense because they won’t expire as quickly. But still, it’s interesting to witness the strange selectivity that everyone seems to follow.

It is very much a hive mind situation. My mom told me that as soon as she started picking up chicken broth to make some chicken noodle soup for dinner, hordes of people materialized behind her to claim their own chicken broth. Even as I write these words though, I am reminded of the three almond milks that my dad brought home today. And the six packs of Canadian bacon, which we as a family have always prided ourselves in taking disgust in.

The most surreal thing was going down to the little market at the end of my street, a landmark of my neighborhood, where my family has been shopping my whole life and seeing how demolished it is. It’s not as large or widely known as a Safeway or a Trader Joe’s so it wasn’t hit by shoppers first, but the fact that things like flax seed crackers and veggie hotdogs have since vanished from the shelves (which have never needed restocking because they are truly disgusting) speaks volumes about the panic that sets in when a crisis has been identified.