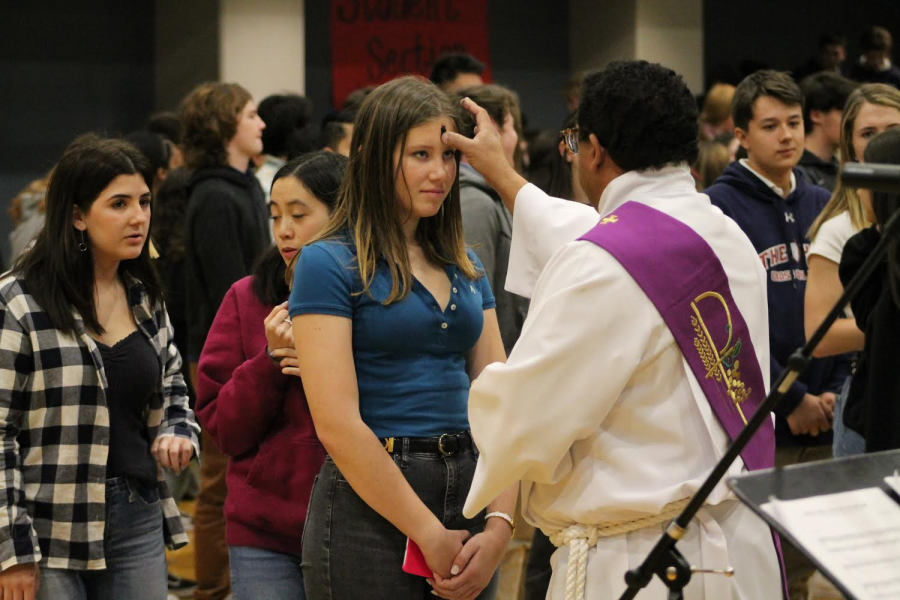 Sophomore Madeleine Richardson receives ashes on her forehead as part of the Ash Wednesday celebration. Ash Wednesday marks the beginning of the forty-day Lenten period during which individuals can fast and reflect on themselves.

The Convent & Stuart Hall community observed Ash Wednesday with an assembly at the Pine Octavia campus at which students received ashes on their foreheads and wrote an intention for the Lenten Season.

Ash Wednesday is a Christian holiday representing sacrifice and reflection marking the beginning of Lent during which Catholics fast, pray, and reflect. The school community marks the event annually by way of an all-school mass lasting just less than an hour.

During the mass, students heard the Gospel read by the priest, a homily, and a talk about the meaning of Lent and the symbol of ashes from Head of School Tony Farrell. Students Jennifer Surjadi, Audrey Roomian, and Annabelle Applegarth performed church songs for the student body as a part of the mass celebration.

“I enjoyed the music: it was definitely amazing and made everything more interesting,” sophomore Madison Wong said. “I think that the cross really helps me remember that I will not always be here and that you have to live in the moment because you never know what will happen.”

Students had the opportunity to receive ashes on their foreheads – as is traditionally done during Ash Wednesday celebrations at churches – as an outward symbol of religion and reflection, according to Community Life Chair Paul Pryor Lorentz. In addition to the ashes, students also had the opportunity to write an intention, prayer or hope for the Lenten season on a sheet of paper and attach it to a cross.

“We want to have extensive opportunities for experiencing ritual in this space,” Pryor Lorentz said. “We want Ash Wednesday to be an opportunity for us to reflect and to open our hearts. The spirit of writing a letter is sort of quiet, sort of a secret embodied prayer with God or the spirit.”

During the Lenten season, fasting and personal reflection may look different to various people. Fasting may range from not eating meat on Fridays to giving up sweets or to sacrificing a favorite soda for the forty-day period. However, many people choose to practice patience, self-reflection, and kindness rather than sacrificing something physical.

“For some, I think Lent can be attempting to take on a new disposition, like trying to be more patient or practicing meditation,” Pryor Lorentz said. “I think it accomplishes what we want which is for Ash Wednesday to be an opportunity for us to reflect and to open our hearts.