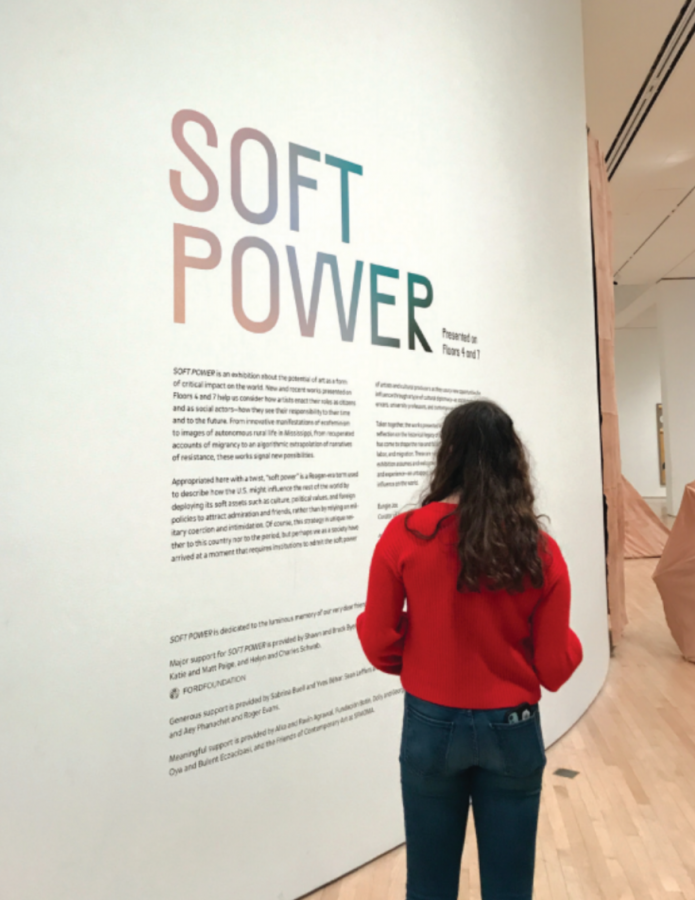 Photographs of immigrating families, abstract paintings and films by global artists make up “SOFT POWER,” a new exhibition at the San Francisco Museum of Modern Art.

While power typically influences and affects one’s actions, soft power is the more narrowed ideology that cultural aspects can influence an individual’s choices, and hard power is when authorities overpower individuals with physical forces or by threats, according to Global Politics teacher Michael Stafford, who accompanied a number of junior and senior students to the exhibit on an afterschool outing.

“I thought it was interesting being able to see the concepts from Global Politics in effect in art, especially how the art coincided with politics and the world,” junior Audrey Scott said. “It was interesting to see the Soft Power exhibit depicting the
global person versus the self.”

The exhibition features a variety of pieces from 20 different artists originating from 12 different countries. The focus of the artworks vary, ranging from depicting ancient Rome to modern encyclopedias, but all share the concept of soft power through cultural influences on individuals.

“These artists are all old enough to understand history as a linear process,” museum guide Avril Angevine said. “It helps show that things that happened in the past affect what’s happening now, and things that are happening now are sources of the past.”

The exhibition is meant to influence and inspire viewers to recognize certain aspects of culture and individuality that are some-
times overlooked in global society, according to Angevine.

“They had everything from films, to paintings, to photography, to music — and all throughout the exhibit there were tons of different ways that people were
expressing themselves,” Stafford said. “The fact that the artists are influencing us and making us think about other parts of the world or other parts of the country or the experiences of other people is an aspect of soft power.”

The artworks touch on modern-day politics, injustices and positive influences and were done in a variety of mediums, including photography, sculptures, glasswork and films.

The artwork also comments on an individuals’ global presence, which relates to the students in the International Baccalaureate Global Politics class, according to Scott.

The exhibition is on the fourth and seventh floors of SFMoMA and runs through Feb. 17, with free tickets for anyone under age 18. The museum is accessible by the 3 Muni bus, with a stop located three blocks from the museum.

“I really enjoyed this one piece in the exhibit depicting papers from a book about missing people and missing things,” Scott said. “I think it relates to the idea of the masses versus individuals and how people are treated.”