Compostable bags, cutlery may be going to landfill 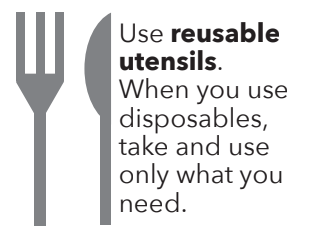 The Broadway Campus cafeteria is flooded daily with over a thousand students and faculty carrying plates, utensils, cups and bowls labeled “compostable” in an effort to foster an ecologically sustainable school community, but when the green bins get picked up and processed in facilities, many compostable containers and cutlery get sent to the landfill.

Compostable containers and utensils can be just as harmful to the environment as other single-use disposable food containers and cutlery when they are buried in landfills as they release methane during decomposition rather than returning to natural materials, according to Raymond Engeszer, IB Environmental Systems & Societies teacher.

“If you put decomposable carbon into an anaerobic environment like landfill, bacteria will still break it down, but compostables will not turn into water and carbon dioxide,” Engeszer said. “It will be broken down into methane, which is horrible for the environment.”

Robyn Purchia, environmental attorney and journalist, reported that compostable plastic bags, straws and cutlery are frequently pulled out of the sorting line and redirected to landfill as sorters struggle to identify what are compostable and what are not.

To what extent San Francisco regularly removes compostable bags and cutlery from the initial food scrap sorting line is unclear as Robert Reed, Public Relations Manager for Recology San Francisco, did not directly answer the question during a phone interview.

“Anytime you bring forward a new industry, it is start and stop,” Reed said. “Two steps forward and one step back, it never works perfectly within the first few years.”

In order for paper containers, compostable utensils and food scraps to decompose into carbon dioxide, water and humus, composting facilities must have proper temperature, bacteria and oxygen levels.

Once green compost bins are picked up, materials go through a sorting line to remove potential contaminated items before being transported to Jepson Prairie Organics in Vacaville, California and transformed into nutrient-rich, according to SF Environment. The finished material is sold to vineyards and farms throughout the Bay Area and allows farmers to organically grow crops without the use of chemical fertilizers, which are often not eco-friendly.

While not all compostable plates, containers and cutlery are immediately processed and redirected to the landfill, it can be alarming that large amounts of composted materials are not being processed by sorters and sent to composting facilities as they should be, according to junior Emily Ternynck, a member of the Eco Friends club.

“Living in an ecologically progressive city makes it much easier for us to be environmentally friendly,” Ternynck said. “I like to use a reusable water bottle because I can carry it everywhere and it’s more convenient than having to constantly get a new cup or single-use plastic bottle.”

Using products intended for repeated use gives customers a reasonable assurance that their plates, cups and cutlery won’t end up in a landfill.

“Sometimes we think that while we put the right thing in the right bin, we don’t always know 100% of the time what happens once it goes through collections,” Engeszer said. “If instead we take single-use items out of the stream and know that our dishes get washed, recycled and reused, we know we are not wasting.”

While lower form Convent & Stuart Hall students eat their lunches on reusable trays that are washed in the kitchen each day, middle form, upper form, high school students and faculty combined use an average of $1387 worth of compostable food containers each week, according to Cheryl Kaufman, Senior Food Service Director for SAGE Dining Services.

“The school has plans in the future to provide for a larger dishwashing and storage area because the ultimate goal of our school is to be as eco-friendly and sustainable as possible,” Geoff De Santis, Director of Physical Plant and Strategic Design Facilitator, said. “Right now, it is just a matter of volume because we serve so many students and faculty in the cafeteria everyday.”

Until the kitchen undergoes expansion for a dishwashing system large enough to accommodate lunchtime service, Kaufman encourages the community to consider using fewer plates, cups and paper boats while in the cafeteria.

“There are pros and cons with both systems,” Kaufman said. “In the meantime, students can consider filling plates with more food instead of using more plates if they want to be less wasteful.”