Stretch before you stroke 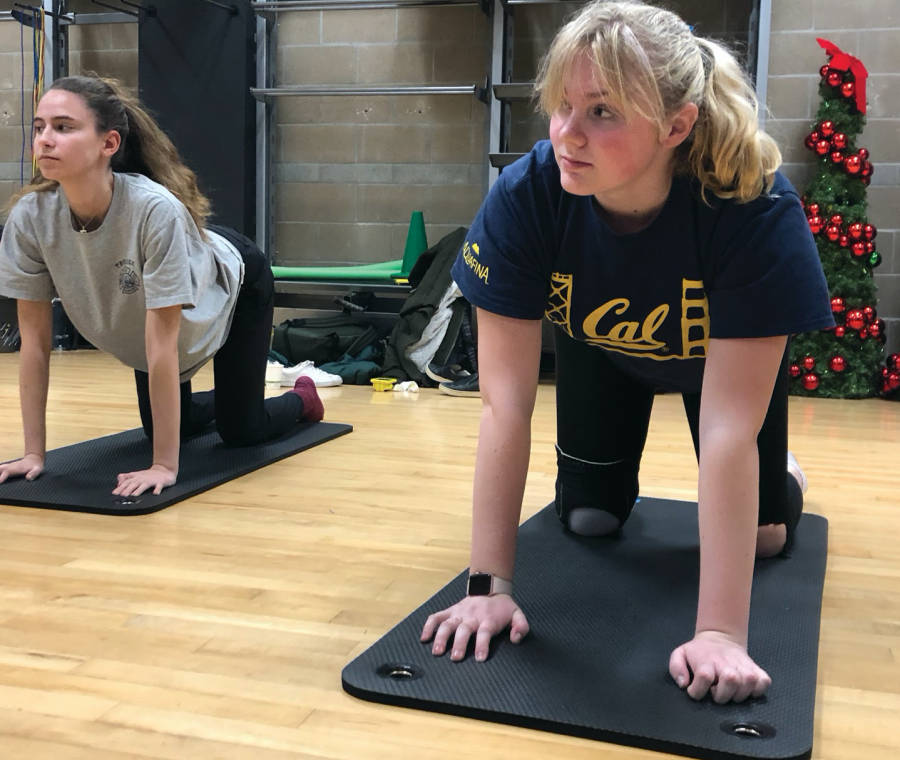 Senior Arlena Jackson and freshman Samantha Calvin move into cow pose in the yoga sequence "cat and cow." Preseason swim team yoga sessions took place in the workout room located next to Herbert Center and may be added to drylands practices.

Before spring sports begin and swimmers dive into the pool for the first practice of the season, the swim team is participating in preseason Kundalini yoga sessions to work on breathing and muscle strength.

Yoga can help with many skills including core strength and endurance, which are necessary for every athlete, according to head swim coach Cassandra Sparsa.

“I have coached soccer, swimming and volleyball at Convent, and I do yoga with every team,” Sparsa said. “I try my best to integrate it into every team I coach.”

The yoga classes involve poses with stretching and breathing and a distinct aspect of Kundalini is the incorporation of breathing mantras into each pose. The exercises can be especially helpful when it comes to flexibility and endurance, according to sophomore Madison Kwan.

“Yoga is all about making sure your limbs and joints are really flexible,” Kwan said. “This is really important to swimming because the more extension you have, the better your technique gets.”

While the yoga classes include poses, stretches and breathing exercises, they also build a strong mindset, which is an important trait for all athletes, according to Sparsa.

“My training as an athlete started with yoga when I was four,” Sparsa said. “It not only gave me strength, but it also gave me self-confidence and the belief that I was able to do more physically than I thought I was capable of.”

The yoga class includes a variety of breathing exercises, such as  “breath of fire” — successive inhales and exhales through the nose — and “lion breathing” — open mouth breaths with a stretched out tongue and a loud “hung” sound originating from the throat on the exhale.

Yoga is beneficial to expanding lung capacity, which is helpful for swimmers, who need to have breath control, according to junior Izzy Ritchie.

“Coach Cazz does a lot of breathing exercises that are very useful,” Ritchie said. “It helps us maintain our breath control and helps our lung capacity in general.”

Kundalini yoga is a physical workout that has an emphasis on meditation. This preseason training is especially enjoyable because it is calming and the team gets to spend time together outside of the pool, according to Kwan.

“The whole experience is really peaceful,” Kwan said. “I feel very centered after, and I get to spend time with my teammates before the season even starts.”

Yoga can also assist in the rehabilitation of muscles and injuries with each pose addressing a specific muscle and, and strengthens the surrounding musculature. Sparsa is especially acquainted with the rehabilitation aspect of yoga, having qualified for the 1996 Olympics, in both freestyle and breaststroke, but a car accident cut short her career. Yoga was the rehabilitation method she says helped her the most.

“After my accident, yoga was pretty much my rehabilitation for everything both physical and physiological,” Sparsa said.