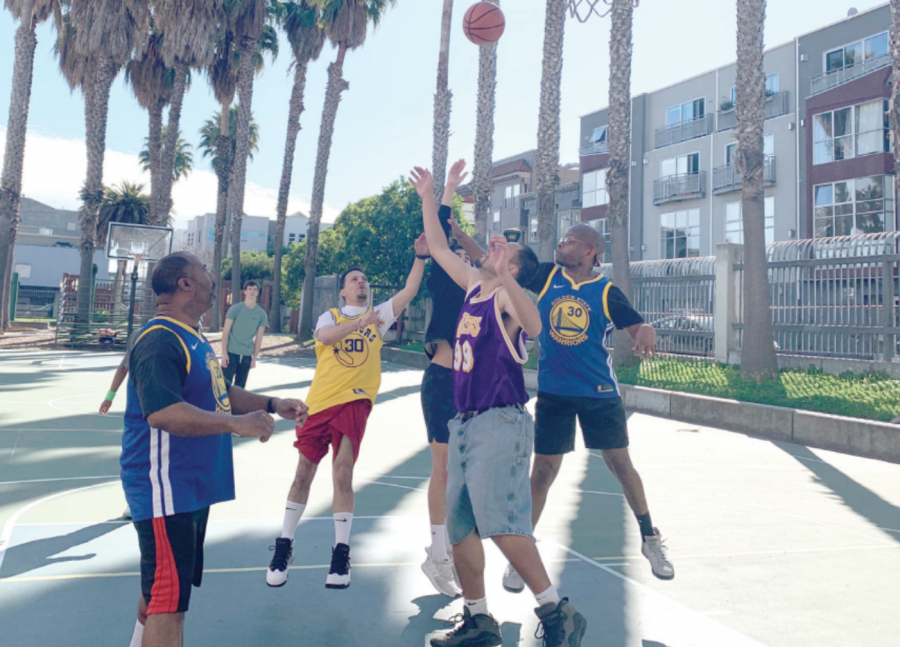 Special Olympics athletes play basketball amongst student volunteers. Sports seasons change year round and include more than 30 options such as swimming, basketball and skiing.

Although the world-wide games only take place every two years, the Special Olympics have ongoing events in the Bay Area yearound.

“The organization creates an opportunity for people that otherwise would not have that opportunity to get out run, play, and move their body,” volunteer Frank Moslander said. “You need a place where the playing field is level, and athletes are of comparable caliber.”

The Special Olympics organization was created in Eunice Kennedy Shriver’s backyard with the founding of Camp Shriver in the early 1960s. The camp was an instant success and it served as a safe place for children with special needs to be active amongst peers with and without disabilities. Eventually the event grew into the worldwide Special Olympics movement.

“It is an organization heavily geared toward inclusion,” Special Olympics Sports Manager Jasmine Brown said. “We want to offer life long skills that will boost confidence and allow our athletes to feel like they belong in a group.”

Volunteers can serve for just one day at a local competition or throughout an eight to 10-week period becoming a coach in a specific sport, depending on their time commitment, ability, and certification.

“My whole family volunteers together once a week throughout varying sports seasons in the year,” Moslander said. “I am a registered volunteer and my daughter is a certified coach for track and field.”

Beginning on a regional level, gold medal winners are placed in the allotment to participate in the Summer Games and a small percentage of winners from this competition advance to the World Games, according to Brown.

Students wanting to get involved with Special Olympics can sign up for the Polar Plunge 5k or 10k on Feb. 29 held in Aquatic Park. The College of Marin Kentfield is also hosting an event on May 26 volunteers.

“Athletes and volunteers alike learn life skills, courage and determination through the work we do,” Brown said. “We teach lessons that pertain to sports and beyond.”