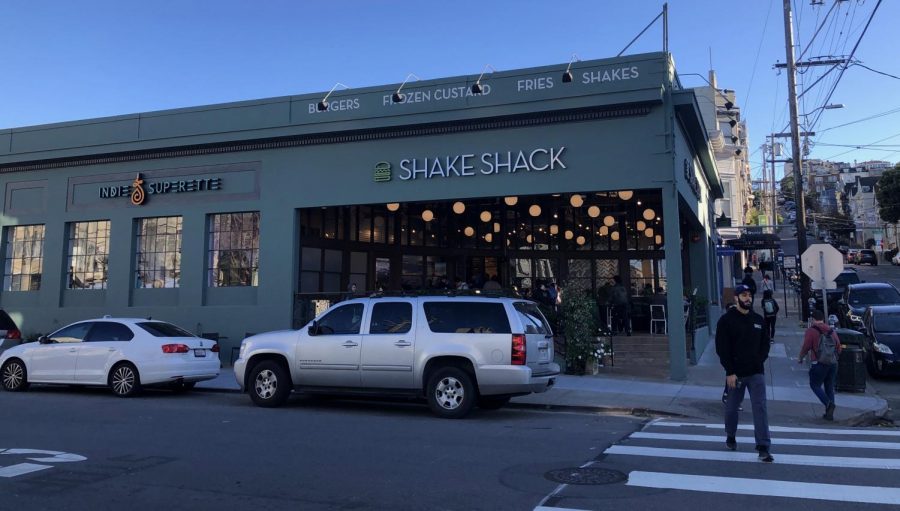 Shake Shack’s new Cow Hollow location is now open for business as of Feb. 3. Shake Shack has over 280 locations worldwide and this is the fourth location to open in San Francisco.

Students can now grab a burger and fries during lunch at the Shake Shack’s new location in San Francisco’s Cow Hollow District at Filbert and Fillmore streets, which had its grand opening on Feb. 3.

“I have eaten at Shake Shack a few times in Marin and on the East Coast and I was so excited to go there since it is so close to school,” junior Aly Bannister, who went on opening day, said. “The staff was so welcoming and the restaurant also featured a small cafe with smoothies and snacks.”

Shake Shack originally started as a hot dog stand at Madison Square Park in New York City in 2001. The chain now has over 280 locations all over the world including the Middle East and Asia.

“I have been to many Shake Shacks on the East Coast and in Los Angeles and I was so excited to hear that there was one opening in San Francisco,” sophomore Takouhi Asdorian said. “I can’t wait to go for lunch since it is only a four-block walk from the school.”

Shake Shack offers a wide variety of items on their menu such as burgers, chicken sandwiches, hot dogs, fries, and various sweet treats and beverages. They also have portobello mushroom burgers.

“As a vegetarian, I was so pleased to hear that Shake Shack had inclusive options for everyone,” Asdorian said.

The Cow Hollow location is the fourth Shake Shack to open in the Bay Area after Palo Alto, Larkspur and San Mateo. The new Shake Shack will feature unique flavors in their frozen custards from Bay Area-based businesses such as Dandelion Chocolate and Pie Dreams.

“I think it’ll be a popular lunch spot for students because it is so convenient and close to school,” Bannister said. “Although it was super busy when I went, orders are easily made electronically so we got food within about five or 10 minutes.”