Democratic participation is more than voting 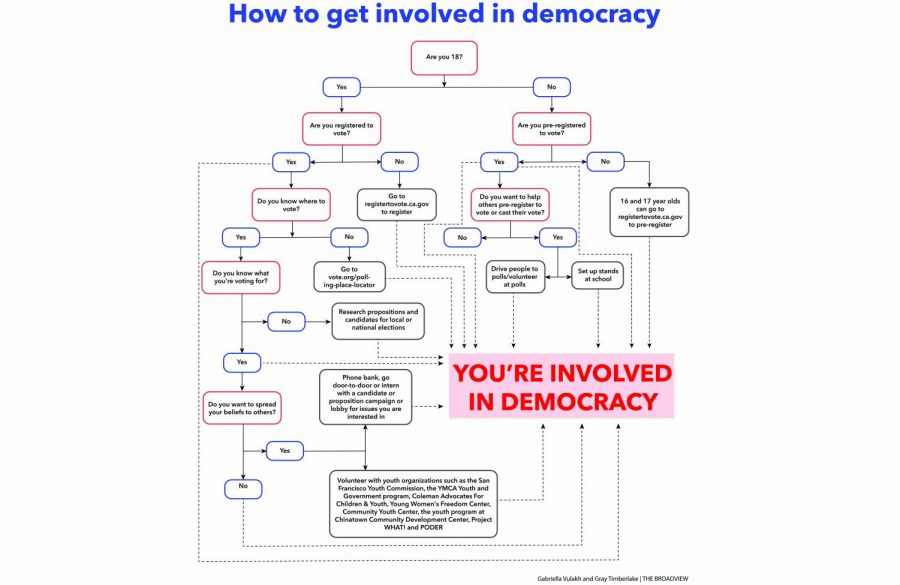 While many adults voted in the 2019 elections last week, young people across the nation are finding other ways to participate in democracy even when they are not legally eligible to vote.

Youth civic engagement can include pre-registering to vote, participating in hearings at City Hall, door knocking, phone calling on behalf of issues and candidates and having discussions with peers about what is happening in the world, according to Celi Tamayo-Lee a Community Organizer at San Francisco Rise.

“Civic engagement means getting involved with local government and actively using the different tools and tactics available to us whether you have the right to vote or not,” Tamayo-Lee said. “Young people are inheriting this world, so they have the right to shape what is happening.”

Senior Brooke Wilson volunteered as a poll worker, helping to distribute ballots and monitor the voting machines to help the adults’ votes get cast.

“Voting day can be really hard for a lot of people who are in a rush to get to work and I just want to be able to assist those people the best that I can,” Wilson said. “I hope to get a higher appreciation for the democratic process and all the minutiae that it takes to make it work.”

Senior Sonia Alazraie lobbied about issues surrounding mass incarceration and immigration while participating in a trip in Washington, D.C. with the Ignatian Family Teach-In for Justice last year.

“I was really nervous to speak to these politicians, but in hindsight it was super gratifying,” Alazraie said about lobbying at Speaker Pelosi’s office. “It felt good to be able to share my opinions and be heard.”

Lobbying and volunteering for local or national campaigns for a candidate of interest can not only give insight into the democratic system, but can be a way for youth to cast their vote with a candidate by campaigning for them. Senior Isabelle Paul volunteered for the Hillary Clinton presidential campaign in 2016 and was an intern for the Suzie Loftus for San Francisco District Attorney campaign in 2019.

“I was under 18 when I started campaigning,” Paul said. “I got to help candidates that I supported, while also learning how our system works.”

Voting with actions can go beyond campaigning for political candidates. Historically, many people have showed their political beliefs or affiliations through “foot voting,” migrating away from politically disagreeable states, attending protests or social movements or simply choosing where to spend their money.

“It’s hard to avoid big corporations,” Carrie Ramirez, a student leader at Youth Vs. Apocalypse, a Bay Area youth activism group, said, “but understanding their values and political actions and possibly looking into other options if you don’t align with them is important.”

Whether it be avoiding corporations with opposing political affiliations, donating to political campaigns of any level, or speaking out about political issues at protests or city hall meetings,

individuals can vote in many ways outside of the voting booth regardless of age.

“Youth are also citizens,” Global Politics teacher Michael Stafford said. “So even though you’re not allowed to vote for the elected officials, you still are absolutely allowed to have a voice at any public events.”

Youth have multiple opportunities to become involved in democracy in private and public organizations in San Francisco, according to Youth Commission Director Kiely Hosmon.

“We are really lucky to have a lot of community-based organizations in San Francisco that have either youth development or leadership programs and that are focused specifically on being advocates for change,” Hosmon said. “Even though young people don’t have the right to vote, they are still constituents and members of the community.”

The San Francisco Youth Commission is currently working on Vote 16, a national effort to expand the voting age to 16 and 17 year olds for municipal elections. Increasing the electorate to younger age groups can help instill the habit of voting for young people who have the lowest voter turnout of any age group, according to Tamayo-Lee, who also was the Vote 16 Campaign Manager for the 2016 election.

“Young people’s lives are so transitional that voting falls very low on the priority list,” Tamayo-Lee said. “The idea with Vote 16 is to have young people cast their first ballot at a less traditional time in their life when they are in their communities and can talk to parents or family members or discuss these different issues in the classroom.”

Vote 16 will appear on the 2020 ballot as San Francisco Proposition F, having finished at 48% in the 2016 election and just missing the 50% passing threshold.

“Young people are inserting themselves into the conversation, mobilizing their communities, and demanding that adults who hold positions of power do something,” Hosmon said. “Adults need to relinquish their power, be willing to really listen and take seriously what young people are saying and be a support system, not a barrier.”

While societal movements encourage youth to participate politically, this has not always been the case, according to Stafford.

“Historically, youth have largely been left out of the picture,” Stafford said. “They have been seen as not particularly well organized, well educated or encouraged.”

Youth involvement in political issues has skyrocketed since the civil rights movement, which encouraged individuals under 18 to participate in the democratic system.

Public events such as the Global Climate Strike in September, are organized because citizens feel there is a lack of political action being taken by politicians, according to Ramirez. Youth organized the Climate Strike in San Francisco because they wanted to speak out on climate change issues and be a voice for people who cannot vote.

“Youth might not be the people who are voting for politicians, but the policies still impact them at the end of the day,” Ramirez said. “Even if you can’t vote, our futures are all affected by politics, so youth need to have a voice, and voting isn’t the only way to have a voice, contrary to what people often assume.”

Many students have stepped out of their comfort zones to participate in political issues through the Engagement Activity in IB Global Politics, according to Stafford.

“It is part of the IB learner profile that we don’t just sit in a classroom and learn about these things,” Stafford said about the IB Global Politics class. “We are not just academics, we are actors in this political system, so getting students involved is really important.”

Initiatives such as Vote16 have created the possibility of the voting age being lowered to allow those under 18 to vote, but, regardless of whether this proposition is passed, youth have proven to have a voice in the world of politics, according to Tamayo-Lee.

“I think there is the classic misinformation about what young people are like,” Tamayo-Lee said. “A lot of adults will say that they can’t trust young people to vote, but I usually turn that around and say, ‘Well, do you trust all the adults who are voting?’ And then they rethink.”