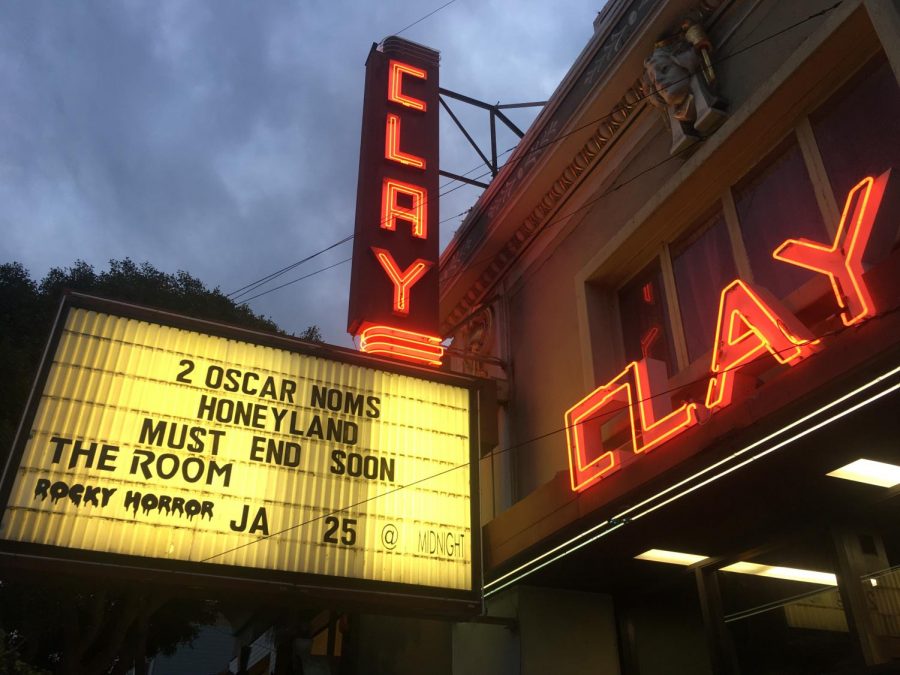 The Clay Theater displays its showings on its final week before its closing. The theater has celebrated more than 100 years as a San Franciscan cinema staple.

WEB EXCLUSIVE As students stroll down Fillmore to get lunch at Starbucks or Mollie Stones, they unwittingly pass by a historic movie theatre that will be closing its doors after 110 years.

The Clay Theatre has made itself part of the culture of Pacific Heights with its worn movie posters, cliché velvet carpets and inviting fluorescent sign. However, the establishment will take this charm with it after its last movie showing on Jan. 26.

“We’ll miss out on some of the interesting films that are being created like theaters like the clay would select,” history teacher Michael Stafford, who had attended multiple showings there, said. “Their films are much more artistic, beautiful and interesting than what a typical mass market theater might create or might choose.”

This closure is no surprise to locals, as close to a decade ago they announced their closure but were kept open by dedicated residents who negotiated with management. In recent years they renovated and obtained a liquor license in order to boost sales, but were unsuccessful.

“I think businesses like these thrive on their historical background,” junior Kate Baker said. “Culture and history are everywhere and its inhabitants would be resistant to let these traditions fade, particularly in neighborhoods like North Beach where I live.”

Though the Clay is only able to show one film at a time, it is one of the oldest theatres in San Francisco as it was built in 1910. Most famously, the theatre holds midnight showings of movies like The Room and The Rocky Horror Picture Show.

“The theater didn’t feel overwhelming and felt really intimate which was very fun and unique,” senior Isabelle Paul said, who attended a midnight showing of Clueless. “I’m sad it’s closing but the experiences that I had there were fun and I will remember them when I look back on my high school experiences.”

The theatre holds significance for the Convent & Stuart Hall community as it was a recent venue for Congé. In addition to its architectural beauty, it holds tradition-based importance for communities and individual movie goers.

“it is just another casualty of the rapid changes that are happening in San Francisco,” Stafford said. “It’s such an important part of the kind of the historical culture and identity of this neighborhood and I’m sorry to see it go.”