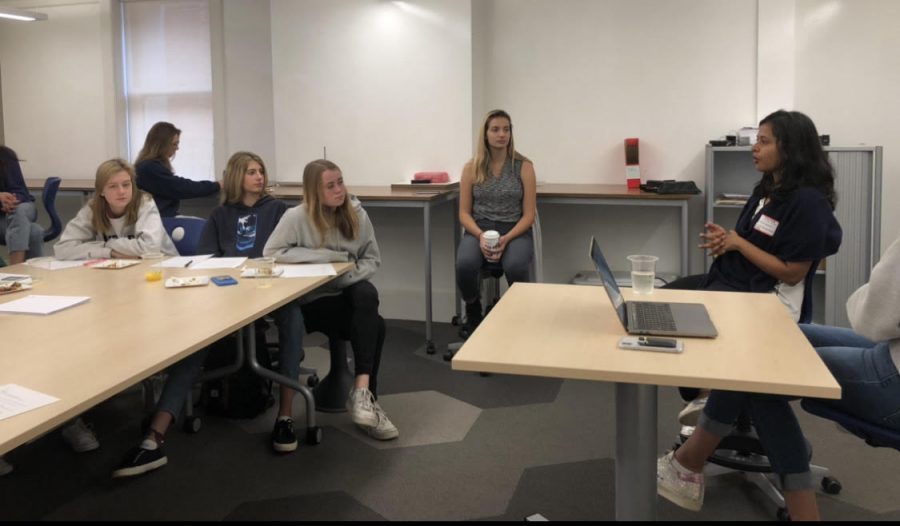 Female Leaders in Technology club members listen to software executive Natasha Mohunty present on the Broadway Campus about opportunities for women in the STEM field. The presentation was the first of a planned series.

A new club is offering connections and information for young women who are interested in exploring the field of technology as a possible career.

“The goal of the club is to expose the Convent community to stories of successful women,” Karti said. “I want to help girls make connections with women already in the tech world.”

Natasha Mohanty, Vice President of Engineering at the software company Gracenote and who has also worked as a chief technology officer and tech manager for prominent companies like Google, spoke to the club in November.

“I hope to inspire young women of all ages and let them know that although technology is a field dominated by men, that doesn’t mean women should find other fields to pursue,” club adviser Melissa Sisco said. “I want to show them that it’s possible to be successful in the field and hopefully give them the push they need to follow their aspirations.”

With meetings every other Wednesday during CoLab in addition to outside talks from female speakers, the club is emphasising the importance of women in technologically-focused fields.

“I’ve only been to one club meeting but I’m excited to see what I will learn,” junior Driscoll Callan said. “I hope it helps me to appreciate the work that the people in that field do.”

Interacting with successful leaders in technology can be a starting point for students with an interest in technology but are unsure where to begin.

“I started this club because I want to help more women feel empowered to pursue their interests in technology,” Karti said. “It’s important they feel this way in order to become leaders in the field.”

Karti says starting this club was a small action to combat the system that has oppressed women from pursuing a chosen profession. In coming months, she says students will be able to accumulate more knowledge from a variety of female standpoints.

“The field of technology is not limited to a specific job, there are a variety of ways women can be involved with technology,” Sisco said. “Speakers from those different fields will excite the young women who have a passion for technology and give them the resources they need to pursue college programs, internships, or other opportunities.”

The technology field is dominated by men with only 18% of computer science majors and 26% of computing jobs held by women, according to the National Center for Women.

“I joined computer science this year in IB,” Callan said. “I thought that joining this club might give me more insight into the business world of technology while I learn about computers themselves in class.”

Even those who are unsure about their interest in technology are welcome to attend meetings and presentations for the club.

“I would recommend this club to any student who has even a small interest in technology or the STEM field in general,” Sisco said. “We want to reach as many young women as possible, so even if you aren’t sure what the tech field is all about, I would encourage you to come listen to  a speaker.”