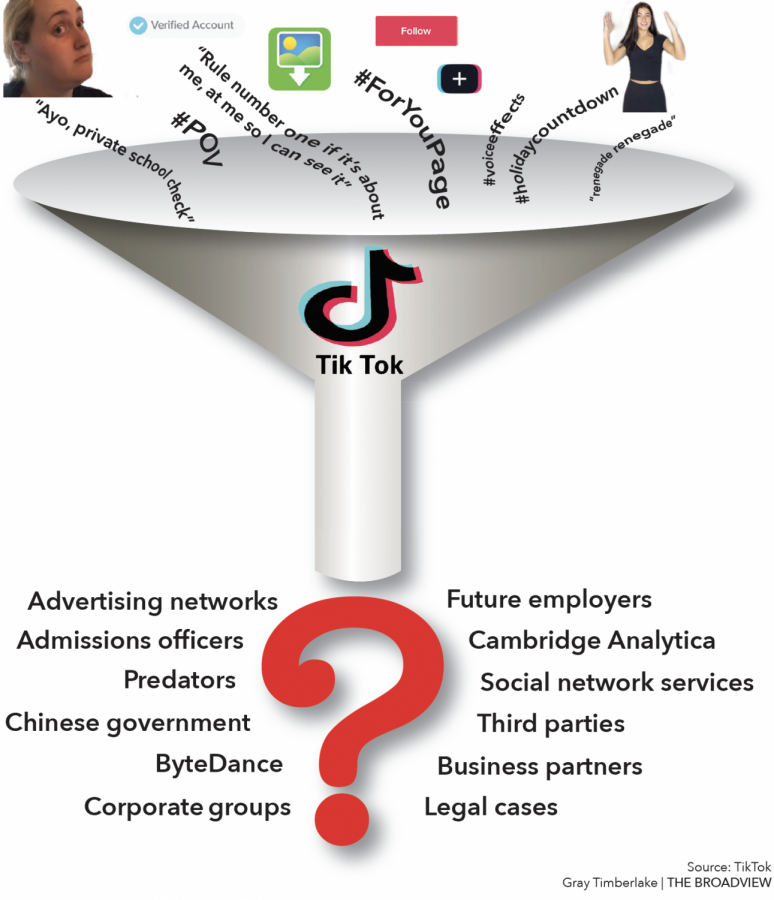 When senior Malinalli Cervantes created a TikTok that went viral, her primary focus was not the potential security issues she could have created for herself.

The TikTok app allows users to post 15 second videos that are typically set to popular music or “sounds.” Videos become “Tik-Tok famous,” like Cervantes’, when they make it on the “For You Page” — an individually curated page of videos with trending videos and videos similar to those users have liked.

“My dad is really concerned with privacy and security with technology,” junior Alliza Manayan said. “He asked me if I had TikTok, and when I told him I did, he asked me to delete it because he said they could take all of my information and use it because it’s not a secure app.”

The Chinese internet technology company ByteDance bought the app Musical.ly for $1 billion in 2017 and turned it into Tik-
Tok. The social media app is now the most downloaded app in the world, with more than 500 million users worldwide, but a recent U.S. government investigation has users wondering if the viral app could be a potential security threat for users.

Sen. Marco Rubio requested the Committee of Foreign Investment in the United States to launch a national security review on TikTok in a letter to Secretary of Treasury Steven Mnunchin on Oct. 9.

“These Chinese-owned apps are increasingly being used to censor content and silence open discussion on topics deemed sensitive by the Chinese Government and Communist Party,” Rubio wrote in his letter.

Rubio claims that TikTok is a national security threat, but in addition to the security and censorship concerns for the United States, there are concerns for the privacy of every individual user on TikTok, especially once videos go viral, like Cervantes’.

The TikTok is set to an original sound by user @lyricplute with a voice saying, “Ayo private school check,” with Gold Digger by Kanye West in the background. The video features Convent & Stuart Hall students in dress uniform around campus, including the Sage lunch spread, Cortile, the view from the Williams Library and the Mary Mardel Chapel and has 376.6K views, 44.5K likes, 3277 reshares and 573 comments as of Dec. 9.

“I made the video because someone sent me a video with the sound “private school check” and asked if it was my school,” senior Malinalli Cervantes said. “It wasn’t, but I thought I could do a better job. I was really surprised when I got 1,000 views in the first hour, but it just blew up from there.”

The Safety team at TikTok did not respond to multiple press inquiries from The Broadview.

“I don’t remember if I read the privacy policy, but I most likely didn’t because I was so excited and in such a rush to make a TikTok account that I probably skipped it,” Manayan said.

“I deleted TikTok for about a week and I’ve been redownloading it and deleting it because I am so addicted,” Manayan said. “It just makes me so happy and watching the videos brings me joy, but the endless scrolling keeps me going and I spend hours on it.”

TikTok has a high retention rate with 90% of users visiting the app multiple times a day with the average user spending 52 minutes per day on the app.

“There is so much peer pressure to download apps like TikTok,” Allan Manayan, Alliza Manayan’s father said. “When your friends tell you to download an app, you bypass all of the privacy agreements, so I sadly don’t think people read the privacy policies.”

Beyond the information users share with TikTok when accepting the Terms of Service, further security risks can come with having a public account, as anyone can see the content that is posted. If Cervantes’ video had been posted on a private account, it would not have made it on the For You Page or gone viral.

“If my account was private I couldn’t go TikTok famous,” Manayan said. “I haven’t thought deeply about the risks, I just want to go viral.”