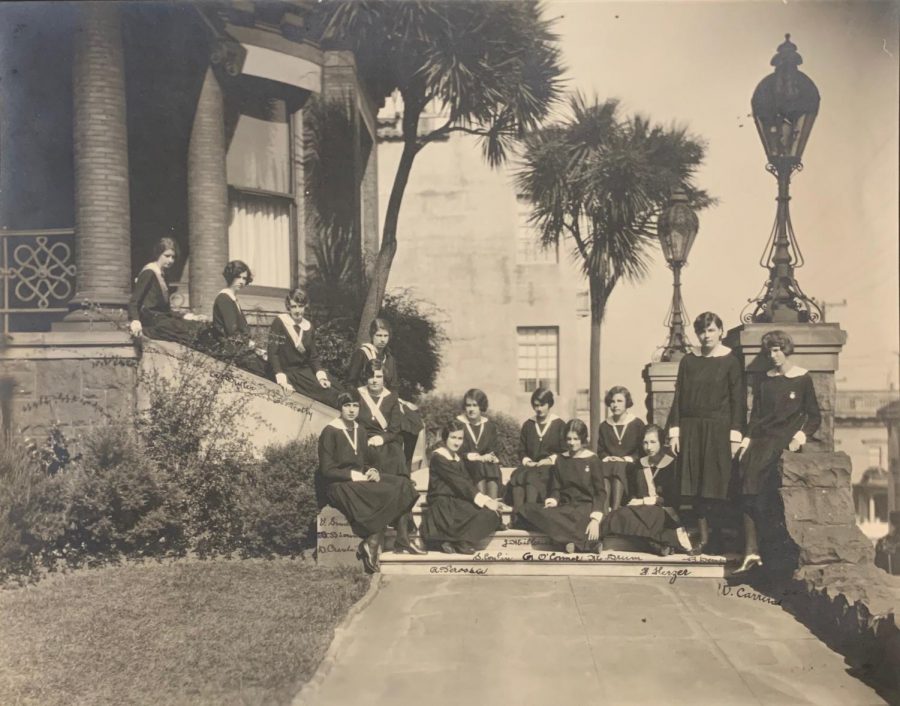 Students pose in front of the Jackson Street Campus situated on the corner of Jackson and Scott streets in the 1920s or 1930s. The Jackson Street school was the third campus adopted by the RSCJs.

Scattered between the caramel-colored benches, vibrant stained glass and religious iconography of the Mary Mardel, RSCJ, Chapel, a number of inscribed wooden plaques serve as records of the women who founded Schools of the Sacred Heart San Francisco.

Reverend Mother Mary Keating, accompanied by Sisters Verde and Atkinson who both served as the first Masters of Religious Education, and Sister Moehler, arrived in San Francisco in July of 1887 to establish the first Sacred Heart school west of the Rocky Mountains.

Upon their arrival, Keating and other religious rented twin houses on Bush Street between Octavia and Gough streets for the primary location for the school. The house, otherwise known as ‘Little Bush Street,’ was chosen because of its proximity to St. Mary’s Cathedral which was a little less than a mile away and then located at Van Ness and O’Farrell streets.

“There was no home waiting for them in the foothills of the Pacific Slope so they had to seek one,” Helen McHugh, RSCJ wrote in a 1942 history of the school entitled “From Bush to Broadway.” “They found two houses — a couple of high, narrow and not at all extraordinary dwellings touching each other.”

Keating assumed the title of superior at the new Sacred Heart school, a title of the highest order in the institution. The first Mass in the Convent took place on Aug. 5 and class began 11 days later.

Sixty students were enrolled as of 1888 and 13 RSCJ joined the San Francisco community. The school operated with the principle that while the school was religiously diverse with Catholics and non-Catholics, students were expected to “the general regulation of the RSCJs.”

When Keating transferred to the Sacred Heart school in Chicago, Reverend Mother Mary O’Meara replaced her as superior. Under O’Meara’s leadership, the school moved to the new location at 715 Franklin St. at the corner of Ellis Street, with the first Mass taking place on Dec. 30.

Young boys enrolled in the preschool, foreshadowing Stuart Hall for Boys that would be founded almost 70 years later in 1956. The entire school totaled to 90 students and 22 RSCJs, including those who taught the congregation’s new novices and postulants.

O’Meara soon transferred from the San Francisco school to the school in St. Joseph, Missouri, and Reverend Mother Mary Gorman replaced her as superior. Gorman oversaw both the foundation of the boarding school at Menlo Park that became the current Sacred Heart Schools in Atherton and the increase of faculty at the Franklin Street campus to 18 RSCJs.

Due to the destruction caused by the 1906 earthquake, Gorman decided to rent out the Franklin Street campus to the United Gas and Electric Company because the neighborhood had become undesirable. The school and convent temporarily relocated to 2020 Washington St. at the corner of Octavia Street.

“Life in San Francisco after April 18, 1906 was a bit disturbed and bordered on the haphazard,” McHugh wrote in an account of the schools, “From Bush to Broadway.” “Strangely enough, life managed to go on undisturbed and according to routine even though the school was uprooted near the end of the school year in 1906.”

Gorman joined O’Meara in St. Joseph and Reverend Mother Delphine McMenamy replaced her as superior at the revitalized Franklin Street campus in late 1906. McMenamy purchased the property at 2700 Jackson St. at the corner of Scott Street and moved the school permanently, establishing an enrollment of 71 students in 1914.

McMenamy transferred to the Sacred Heart school in Seattle and Reverend Mother Mary Guerin replaced her as Superior in the fall of 1914. Guerin went on to establish and dedicate the new school chapel at the same time as James & Maud Lee Flood were building their new mansion at 2222 Broadway.

“Reverend Mother Guerin had a deep and supernatural influence on the students who understood that her reserve and apparent coldness hid her gentleness and devotion,” according to an informational packet on Guerin compiled in 1984.

Reverend Mother Mary McMenamy took over the role of Superior from Guerin, who was relocated to the Menlo Park (Atherton) school. The school’s enrollment reached a total of 115 students as Madeleine Sophie Barat, the founder of the Religious of the Sacred Heart was canonized in 1925.

On the verge of the Great Depression, the school had 24 RSCJ in its community with a student population of 136 students. As the stock market crashed, Reverend Mother Blythe was established as superior in San Francisco, replacing McMenamy. Under her supervision, the Menlo Park school was incorporated as a senior college.

Gorman returned to San Francisco and took over superior from Blythe, who was sent to Menlo Park as their superior as the college grew. In 1937, the school celebrated its 50-year anniversary and reconnected with the newly-appointed San Francisco Archbishop J.J. Mitty.

Reverend Mother Eleanor Deming assumed the position of superior in at the Jackson Street campus, while Gorman moved to Menlo Park. Soon after, Maud Flood, widow of silver baron James Flood Sr., donated her mansion at 2222 Broadway between Fillmore and Webster streets to the Society of the Sacred Heart. Reverend Mother Rosalie Hill, the vicar and superior at the nearby Lone Mountain campus — now part of the University of San Francisco — oversaw the process.

“Reverend Mother Hill was quite a remarkable woman,” Mary Mardel, RSCJ, said in a 2016 Convent & Stuart Hall video on Founding Mothers. “It was she who did all the renovating and planning for this house, converting it from a private home into a school. It was no wonder that when Mrs. Flood came back to visit the house for the first time, she said ‘It’s more beautiful than it was when I lived there,’ which was a great tribute to us.”

Holy Saturday of 1940 transformed the school, as an open house and reception for the Flood family advertised the new owner of the “Palace Beautiful,” the newly appointed campus on 2222 Broadway. Soon after, Deming took over as Superior, Master of Religious Education Eleanor Jenkins became Mistress General and the first Mass was celebrated on April 2, 1940.