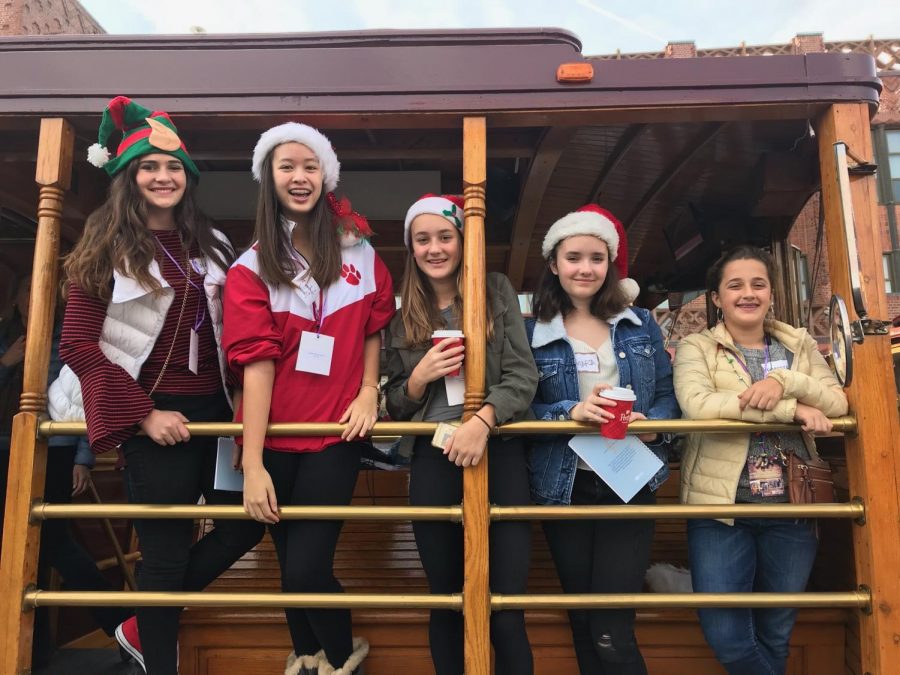 Junior Audrey Pinard smiles with her friends at the National Charity League with the Institute of Aging’s “Cable Car Caroling.” This year’s caroling was canceled due to rain.

While Christmas movies and advertisements often portray groups bundled up in hats and scarves walking through the snow singing carols at people’s doorsteps, very few still choose to participate in this Christmas tradition.

“It’s not a tradition in my family to Christmas carol, it was never something I did or was interested in,” sophomore Nina Gutierez said. “I also never see Christmas carolers in my neighborhood or in the city.”

Only 8.6% of Convent students go out caroling during the holidays, according to a Broadview survey.

Many of those students participate in holiday singing for service with organizations such as the Institute of Aging’s “Cable Car Caroling,” San Francisco Conservatory of Music, and the National Charity League who all put together Christmas caroling groups for volunteers.

“Christmas caroling, I’ve noticed, gives a lot of joy to people, especially of older generations,” junior Audrey Pinard, who has been caroling for the past two years with NCL, said. “Knowing that we are able to bring back holiday traditions to them can bring a lot of joy to the community.”

Christmas caroling can also be a way for people to get to know their neighbors and bring together the community during the holiday season, according to theology and spirituality teacher Brian Lorentz.

“People are less interactive with their local communities nowadays,” Lorentz said. “There’s a few moments in the year where you really get to interact with your neighbors, which is a really beautiful opportunity to connect with real and good people.”

Convent & Stuart Hall practices its own form of Christmas caroling every year at Noëls, a century-old tradition, in which the four divisions come together to sing Christmas songs as a thank you gift to the president and heads of schools.

“I think it’s really cool to see the whole school participate,” junior Sophia Houts said. “I love getting to see all the kindergarteners sing, because I remember doing that when I was little.”

In addition to Noëls, Lorentz says he is interested in going caroling classroom to classroom on campus and singing to teachers with students in some of his theology classes, something he has done at previous schools he’s worked at.

“We would sing Christmas carols in different classrooms which was a whole lot of fun,” Lorentz said. “We’ll see, hopefully there’s an opportunity to carol with the students here.”