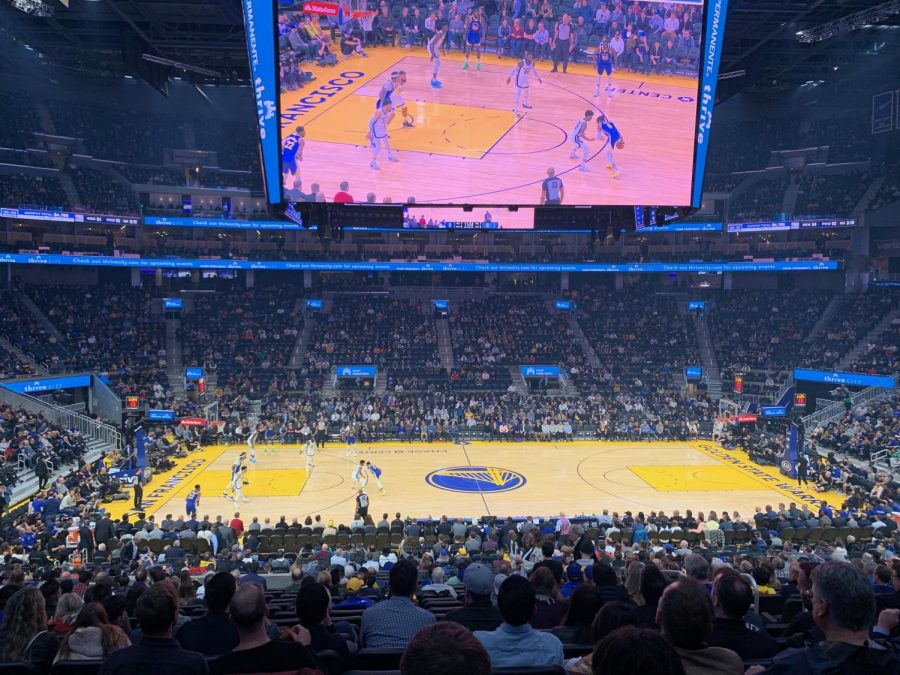 The Golden State Warriors play the Memphis Grizzlies at Chase Center on Dec. 9. The new arena in Mission Bay can seat over 18,000 people each game.

Since the opening of Chase Center in Sept., Mission Bay’s new 18,000 square foot stadium has hosted music concerts and Warriors games. The arena also brought Thrive City — a 3.2 acre plaza with dozens of restaurants — to the neighborhood.
“Chase Center is overall easier to navigate than Oracle Arena and everything inside is more clean and organized,” sophomore Eliza Spaht, whose family has season tickets at both venues, said. “The Chase Center commute is much easier and I enjoy how the new arena is decorated nicely.”
Seventy percent of season ticket holders from Oakland’s Oracle Arena transferred their tickets when the Warriors moved to Chase Center, allowing fans on the waiting list to fill up the remaining 2,000 seats, according to the San Francisco Chronicle.
“I really enjoyed my time at Chase Center when I went to an Elton John concert, as they had incredible food options and the whole event ran smoothly,” senior Miley Sherman said. “Unlike other concerts, I didn’t have to leave during the last song to avoid traffic since there was a convenient area for Uber and Lyft pick ups and drop offs.”
Chase Center features new technology such as a video board on the street side of the building which is used for road viewing, transit information and movie nights. There is also a moving indoor gantry, similar to a steel cage, that no arena has seen before, according to William Hon, an architect who worked on the Chase Center project for six years.
“The gantry is the most unique feature of the building because it allows for center stage concerts that can play right under the scoreboard without having to rig,” Hon, who works for MANICA Architecture, said. “It is very complex and I would consider it to be a miraculous engineering achievement.”
Chase Center also sports the National Basketball Association’s largest scoreboard with 9,500 square foot of LED lights developed by Samsung, which retracts into the ceiling fully to optimize space for concerts.
The Chase Center project, which began its process in 2012, was originally planned to reside on Piers 30-32 next to Oracle Park instead of in Mission Bay. Residents in the area did not want another large stadium, claiming the neighborhood would no longer be “family friendly” with blocked views and increased traffic, according to The Examiner.
Residents of the area proposed a ballot measure “Waterfront Height Limit Right to Vote Act” to the city in Dec. 2013 and the proposition passed in June 2014. The ballot’s approval affected the Chase Center project, which forced it to move locations.
“It became clear that the reality of that project on that site was not possible and we started to look at alternatives,” Hon said. “Moving the entire project resulted in a big reset button since we had been working on the project for quite a while already.”
The adjacent Thrive City hosts Bay Area-based restaurants, as well as activities such as yoga sessions and ice skating. The Hooptopia experience allows visitors to travel through different rooms while playing basketball and candythemed activities.
“At Hooptopia, there are many interactive activities such as a slam dunk simulation, a ball pit, and vertical jump tests,” freshman Jardin Davis said. “While I was in Thrive City, I really enjoyed the restaurants and shops inside and I can’t wait to go back to Chase Center for a concert or a Warrior’s game.”
The Warriors first game at Chase Center on Oct. 5 marked their first time playing in San Francisco since the 1960s after moving to the West Coast from Philadelphia.
Upcoming events at Chase Center include the Warriors vs. Sacramento Kings on Dec. 15 and Ariana Grande on Dec. 17 and 18. Tickets for the game range from balcony seats at $50 to courtside VIP seats at $2,250 and tickets for Ariana Grande range from $87 for balcony seats to $555 for floor spots, which are available on chasecenter.com.