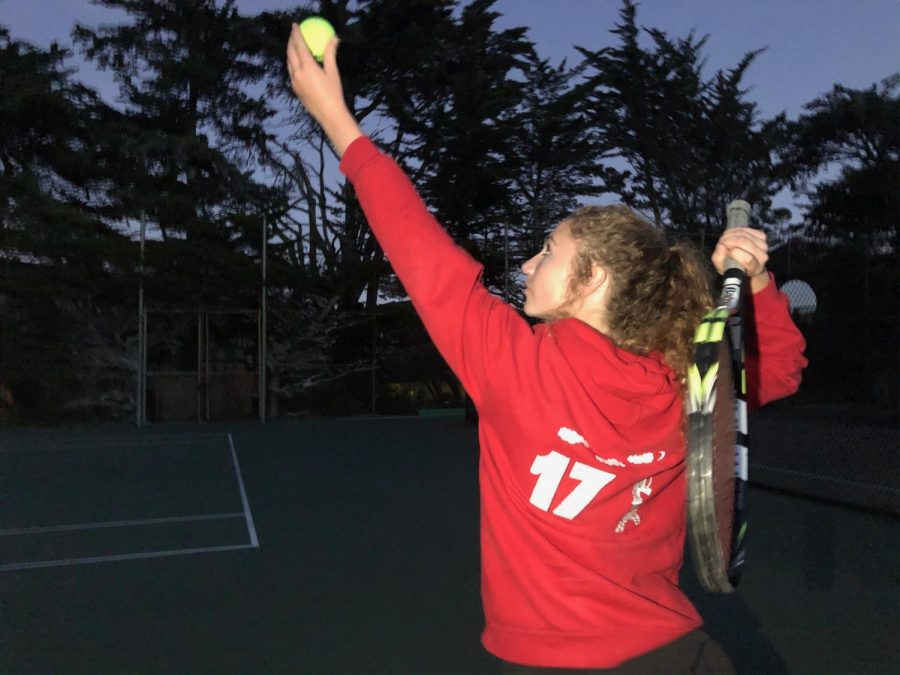 Junior Ella Holliday serves the ball during a practice round. Playoffs will continue into semi-finals through the end of this week and can ultimately extend until next week for finals.

WEB EXCLUSIVE Convent’s varsity tennis team played at the San Francisco State University courts for their first round of playoffs against the Urban School of San Francisco.

The team lost two games and won the remaining matches throughout the season, including the Lick-Wilmerding High School team which is one of their top competitors.

“I think it is really impressive that our team beat Lick-Wilmerding,” junior Bella Wasserman said. “They are a very good team and they put up a good fight, but I think we really rallied up our spirit and came out on top”

Captain of the varsity team Miley Sherman emphasizes team spirit and bonding during practices and games through cheering and fun activities such as a team sleepover.

“I consider the girls on my team my family,” Sherman said. “I’m incredibly sad to be leaving next year.”

The team won their match this afternoon against Urban with a score of 4-3. The team will move on and play San Francisco University High School on Nov. 6 for the semi-finals.

“I’m extremely excited to play University tomorrow,” junior Ella Holliday said. “We were extremely close last time so I think as long as we have our enthusiasm and our determination we could beat them.”

The team’s semi-finals match will immediately follow their first play-off match against Urban, so the team will not have time to practice. Though, the team is prepared and will carry the spirit of victory over into the next match, according to Wasserman.

“Although we are missing a practice to prepare, our team is ready to compete,” Wasserman said.

Seniors such as Sherman want to end their season with a win, especially against University who they lost a close match to, with a score of 2-3.

“This is my last year playing tennis so I really want to show our semi-final competitors how good our team is,” Sherman said.